Uhuru regretted that despite Africa contributing less to global emissions, the continent suffers the most.

• "In this regard, we must continue pressing for recognition of special needs and circumstances of Africa as recognized in the convention." 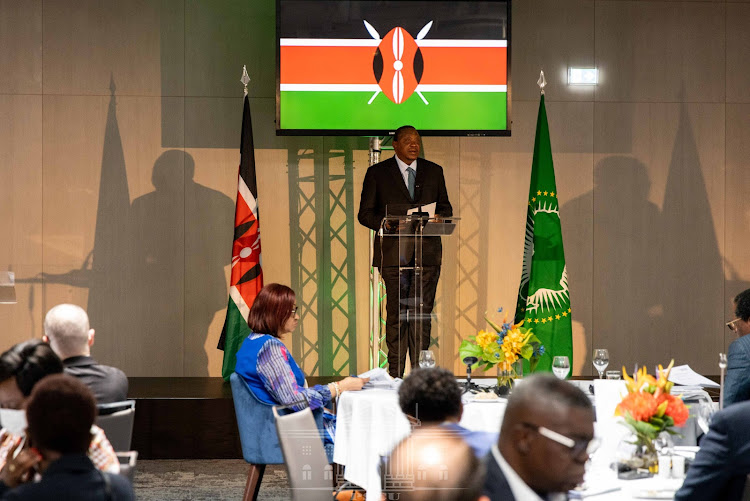 President Uhuru Kenyatta has called on African nations to develop and advance a common agenda as the continent prepares to host the 27th United Nations Climate Change Conference (COP27) in Egypt in November this year.

"Africa and its member states, under the umbrella of the Africa Union and African Ministerial Conference on the Environment (AMCEN) must synchronize its messages and speak with one voice in all inter-related global events."

"We must use our collective bargaining weight to its full advantage to influence the outcome of these multilateral processes," he said.

Uhuru was speaking during a meeting of the Committee of African Heads of State and Government on Climate Change (CAHOSCC) on the sidelines of the 2022 UN Ocean Conference in Lisbon.

He encouraged Africa to take advantage of its hosting of COP27 to push for equity and justice in climate financing.

"As agreed in Glasgow, ambition on all fronts remains critical to solving the climate crisis. Sharm El-Sheikh must build on, and strengthen the commitments in the Glasgow Pact," he said.

The President added that ambition must also reflect equity, justice and the principle of Common But Differentiated Responsibility and Respective Capacity (CBDR-RC) and must leave no one behind.

Uhuru regretted that despite Africa contributing less to global emissions, the continent suffers the most, from the climate-induced crises, the responsible countries "are not operating in emergency mode".

"The ongoing drought in the Horn of Africa, the cyclones in Mozambique and neighbouring southern African countries, the recent devastating floods in South Africa and a locust invasion in 2020 underscore the reality of the emergency."

"In this regard, we must continue pressing for recognition of special needs and circumstances of Africa as recognized in the convention."

He said the time had come for Africa to hold to account "big emitters"  by resubmitting more ambitious Nationally Determined Contributions (NDCs) by the deadline of September 23.

At the same time, President Kenyatta noted that the climate financing gap in many African countries is so huge that it "surpasses government budgets and available donor funding".

"The fact that we are still struggling to reach USD one billion (Sh1.2 billion)after 13 years, to say the least, is nothing but scandalous. We must change this narrative," he said.

He added, "Adaptation finance must be tripled. A dedicated fund for loss and damage should be put in place to support the recovery from climate emergencies."

On the Kyoto Protocol, the President said the carbon market arrangement did not benefit Africa largely due to scanty foreign direct investment opportunities and lack of technical capacity to participate in the Clean Development Mechanism (CDM) on fair terms.

He further welcomed the country's delegation that is set to visit Nairobi next month to align the initiative with a similar exercise led by the East African Community.

He will preside over UN Ocean Conference.
News
3 months ago