• Ease congestion in Eldoret, especially by heavy lorries ferrying goods through the town to the Great Lakes region. 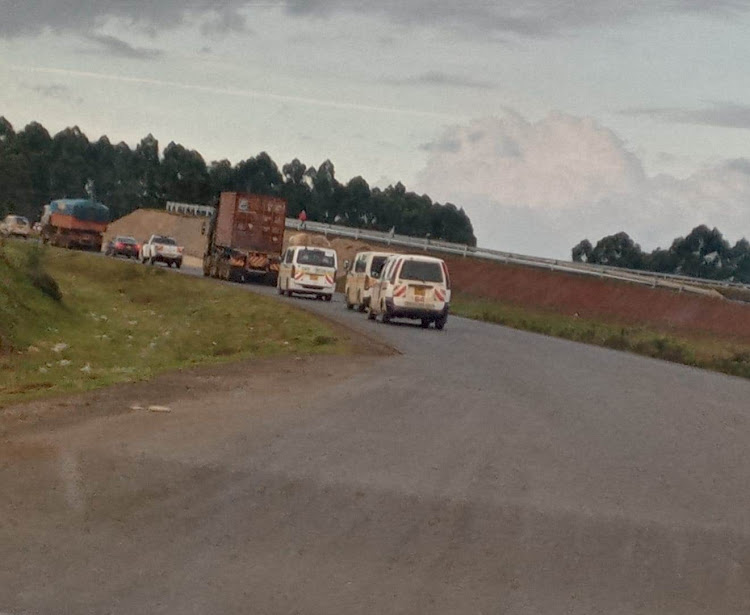 The Sh9.6 billion Eldoret Southern Bypass has been completed after five years and is set for commissioning.

It has three overpass interlinks at Ngeria, Kapseret and at Leseru. The project was largely funded largely by the African Development Bank.

Government spokesman Cyrus Oguna and Uasin Gishu county commissioner Stephen Kihara toured the project and said the contractors were working on the final touches before commissioning.

“The road will ease congestion in Eldoret town and enable quick movement of goods and people through Eldoret," Oguna said.

President Kenyatta will visit Eldoret on Wednesday for a passing-out parade at Moi Barracks Recruits Training College. It is reported he may also commission the bypass at Leseru interlink.

More than 97 per cent of the bypass has been completed and most of the 1,000 displaced families have also been paid.

“Only a few families still have disputes pending in court and once the matters are settled the money will be paid out, " Kihara said.

All the money for the affected families has been paid to the National Land Commission.

“The project is a milestone for Eldoret as we have been experiencing serious congestion and traffic jams for many years, so business has been slowed," Mandago said.

Narrow Uganda Road is the main road in Eldoret and its width worsens the congestion because it's used by long-distance lorries moving goods from the Port of Mombasa to other countries in the Great Lakes region.

The new bypass will allow diversion of all long-distance trucks, reducing traffic jams in Eldoret by more than 70 per cent, planners said.

Taxpayers to foot extra costs in penalties from delayed payment of infrastructure debts.
News
1 year ago

900 families to be paid for Sh5.6bn Eldoret Southern By-pass

360 families receive compensation so far, others to follow.
Counties
2 years ago
“WATCH: The latest videos from the Star”
by BY MATHEWS NDANYI
News
26 June 2022 - 22:00
Read The E-Paper