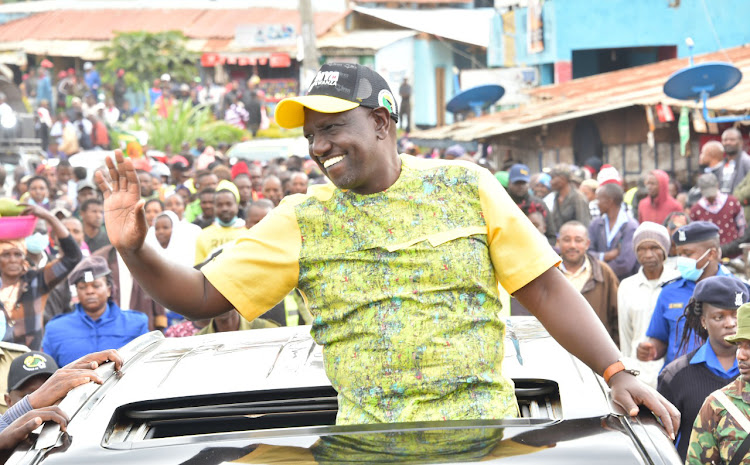 Ruto said Raila, as an adviser to President Uhuru Kenyatta, must be faulted for the sharp rise in the prices of commodities like maize flour and cooking oil.

He neglected to mention the war in Ukraine that has cut off grain supplies to much of the world, as well as the failed rains in Kenya and other factors. The war and reduced subsidies have also increased the price of oil, which increases the price of transportation.

Kenya far from alone is a victim of the global economic downturn.

The Deputy President said Raila has been giving the President the wrong advice, which has resulted in the cost of living going up.

Raila has been accusing Ruto and his allies of plundering the country's resources through corruption leading to the high cost of living.

On Sunday, Ruto said the top priority of his Kenya Kwanza government would be to lower the cost of living.

“Some people are asking how I will do it. When I was made minister for Agriculture, the cost of fertiliser was Sh5,000 but I lowered it to Sh2,500. I was just a minister then, what if I become the President?” he asked.

Mudavadi reiterated that Kenya Kwanza’s goal is to restore the economy and uplift the lives of the ordinary people.

“I have seen lactating mothers here. When their children grow up, they will need porridge but sadly, unga is Sh250. They have made it impossible even for children,” he said.

Wetang’ula said people across the country are suffering because of a hike in the prices of basic commodities.

The Bungoma senator urged residents of the Coast region to vote for Ruto,  saying his government will pay attention to the needs of ordinary people.

“In Western Kenya, it is Kenya Kwanza. It is the same in Mt Kenya. Here at the Coast, we have been going round and things are changing,” he added.

Nyoro said Uhuru let the Mt Kenya region down just as it has let down other regions.

“If there are people counting his last days in office, it is us. We cannot wait for him to go home with his handshake brother,” he said.

A 2-kilo packet of maize maize flour is going by an average Sh200.
Business
3 months ago

Unga prices to remain high for next six months — researcher

Agriculture expert says food crisis is not isolated to Kenya but is a global problem.
News
3 months ago