Says he should be judged by his development record 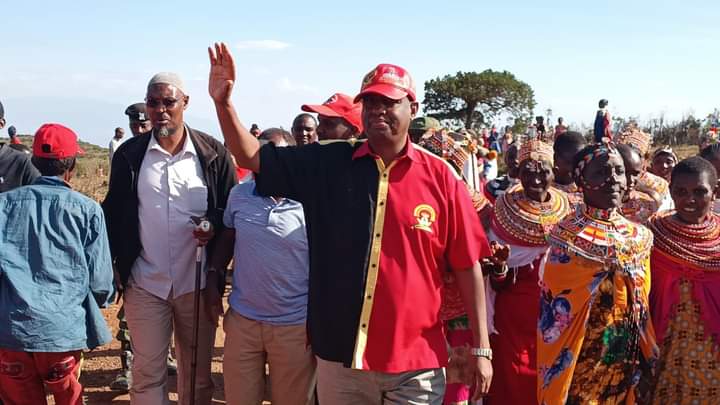 He said residents should give him another term to complete the projects he initiated.

The governor who is seeking to retain his seat on a United Democratic Movement ticket spoke on Tuesday during a rally at Mt Kulal in Laisamis.

"I promised to develop Marsabit county in 2017.  I want you to judge me by my development record," he said.

Ali said he has worked on infrastructure, health, education as well as youth empowerment.

He promised residents that the good work will never stop and they should expect more goodies.

"You have tested me and you can see what I have done. Let's join hands to ensure continuity of the projects," Ali said.

The county boss said his administration invested massively in the health sector with a focus on preventive health care.

Ali said he also initiated scholarship programmes for bright and needy students and the selection process is fair.

He said children from poor backgrounds now have a chance at education.

The governor further said his administration will take development to every corner of the county for holistic and integrated development.

He said he equalised the ward development fund for equality across the county.

The candidate also promised to focus more on social development to ensure women, men and youth are empowered.

He urged residents to support his bid and that of Azimio presidential candidate Raila Odinga for more development and economic growth.

Gubo said the dream of each community can only be realised through formidable coalitions, as no one can stand alone and get elected.

Hargura said residents should unite and support Ali's re-election bid as the region stands to benefits from his administration.

He however asked for the residents support in his 2027 gubernatorial bid.

Elders commended Ali's administration, describing it as unprecedented and revolutionary.

They said the governor has continued to deliver his promises with unbridled commitment.

Youth leader Timothy Lekeren also hailed the governor for the strides taken in infrastructure and health.

He said residents will rally behind his re-election bid for the continuity of his good work.

Lekeren said the governor has initiated various development projects, which are promoting the region economically.

The county boss however criticised the National Treasury for holding the county's money saying the decision has disrupted operations.

Raila is seeking to strengthen his grip in the pastoral community's vote basket.
News
1 week ago

Marsabit has not received its allocation for the month of April, May and June.
News
1 week ago

The delay of funds has caused undue unrest in the county as pending bills continue to increase.
News
1 week ago
“WATCH: The latest videos from the Star”
by ABDIKADIR CHARI
News
23 June 2022 - 22:00