Affiliate parties candidates lamented over being denied recognition in rallies. 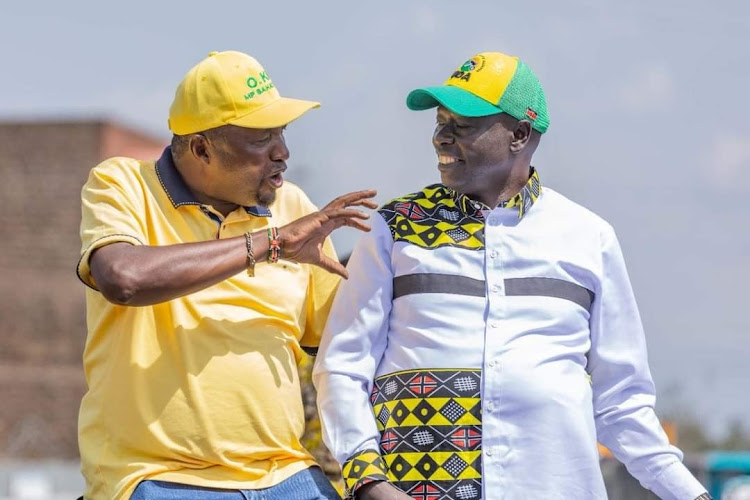 Candidates of Kenya Kwanza affiliate parties were not recognized during Wednesday’s campaign trail in Nakuru where the alliance's top guns vouched for a six-peace vote in favour of UDA.

The team led by Deputy President William Ruto’s running mate Rigathi Gachagua failed to acknowledge candidates of other parties such as Amani National Congress, Chama cha Kazi and other parties.

In Rongai Constituency where they started the trail that traversed through Nakuru Town West, Nakuru Town East, Bahati and Subukia, only UDA candidates were allowed to talk.

This angered ANC’s County Woman Rep candidate, Eunice Lelei who termed the move as unfair and aimed at sinking affiliate party candidates into oblivion adding that it made her feel less important.

The trend was replicated throughout the campaign trail forcing Gatundu South MP, Moses Kuria to break the protocol and give a Chama cha Kazi MCA candidate an opportunity to speak.

Bahati Ward MCA aspirant on ANC ticket, Maryanne Nyaruai said she had to write a note and sneak it to one of the legislators to have her name mentioned.

During the campaign, Bahati MP, Kimani Ngunjiri and Senator Susan Kihika who have had differences on social media buried the hatchet.

They shook hands and vowed to work together for a Kenya Kwanza win in the populous county.

The duo has been embroiled in supremacy battles over the leadership and operations of the UDA party in the county.

At one time, they exchanged nasty words on social and mainstream media.

Ngunjiri swore to help Kihika win the gubernatorial race against the incumbent governor, Lee Kinyanjui and five others.

“We have set aside our differences and I will help Kihika oust the current Governor. Together we will ensure a clean sweep of all Nakuru seats for UDA in the August 9 General elections,” he said.

The turnaround comes barely a month after Kimani publicly declared his support for Kinyanjui during Madaraka Day Celebrations held at Kiamaina Primary School in Bahati.

Days later, Ngunjiri went to the media saying he was free to support whoever he wants and accused Kihika of clinging on to Ruto for selfish gains.

On Wednesday, however, the two showed expressed commitment to working together so much so that Kihika gave  Ngunjiri Sh100,000 to complete a stalled water project in Bahati.

Gachagua who was accompanied by a host of MPs allied to UDA among them Ndindi Nyoro, Charity Kathambi, Charle Njagua and Jaye Kihara among others promised to lower the cost of living if Ruto assumed power.

He assured Rongai residents who have been suffering from perennial water shortage that the problem would be resolved.

Gachagua said there will be no violence whatsoever in Nakuru or Rongai areas.
News
3 days ago

Gachagua is expected to visit Nakuru on Tuesday.
News
5 days ago
WATCH: The latest videos from the Star
by LOISE MACHARIA
News
23 June 2022 - 01:21