The House adjourned sine die on June 9, 2022 ahead of the August 9 general elections.

• Among the misses is the failure to adopt the report on the Sugar saga on alleged importation of illegal sugar and the Covid funds probe, popularly known as Covid millionaires. 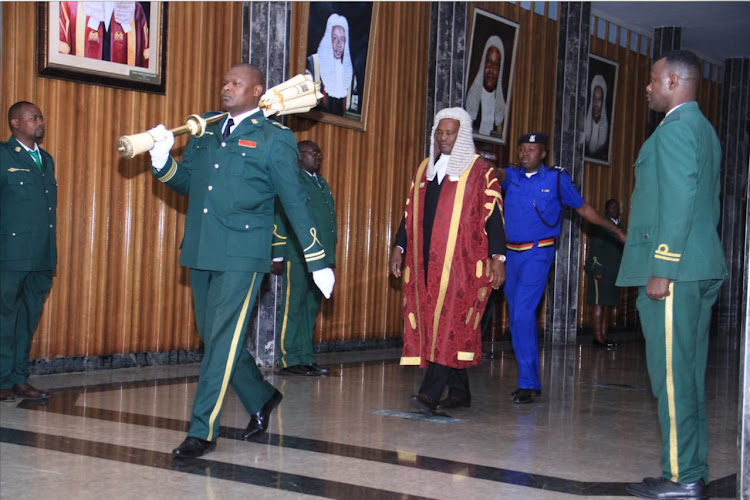 FILE National Assembly Speaker Justin Muturi walks out of the chambers for the last time in the 12th Parliament after the last session on June 9
Image: EZEKIEL AMING'A

The National Assembly has indicted itself for failing to conclusively probe two major scandals that rocked the country during the 12th Parliament.

The scorecard comes two weeks after the House adjourned sine die ahead of the August 9 General Elections. Sine die means adjournment with no set date for resumption.

In the scorecard, MPs listed two items they deemed as missed opportunities over the five-year period since they were sworn in on August 30, 2017.

They cited failure to adopt the report on the Sugar saga and the Covid funds' probe, popularly known as Covid millionaires.

On the alleged importation of illegal sugar, Treasury allegedly imported 453,7560 metric tonnes of excess sugar during the waiver period in 2017.

The report, prepared by the joint Departmental Committees on Agriculture, Livestock and Trade, Industry and Cooperatives, was dismissed by the House.

The debate was marred with allegations of bribery and outside influence as MPs ganged up and trashed the report which had implicated the then Treasury Cabinet Secretary Henry Rotich, his EAC counterpart Adan Mohamed and former Agriculture CS Willy Bett.

During the debate on the report on August 9, 2018, the session was punctuated by protests and claims of bribery.

The most dishonourable scene was where lawmakers were seen openly scrambling for Sh30,000 allegedly dished out to shoot down the report.

The source of the money was unknown but MPs formed a long queue ten minutes before the afternoon sitting where ‘facilitation’ fee was allegedly dished out in a room at the New Wing Bar of the Senate.

“We cannot pass a report whose members cannot agree on anything. I am aware of some members meeting before the session to share some loot but we will shoot it down purely on our own conviction,” the Star quoted an MP who sought anonymity.

The MPs dismissed the report saying it lacked evidence to hold Rotich, Mohamed and Bett personally responsible. They said the three should not be indicted for crimes of corporate entities.

It was the Kenya Bureau of Standard’s failure to conduct surveillance and ensure poisonous or illegal sugar did not get into the country, they argued.

“Let us use our resources to bring a substantive motion to debate the CSs and not try to impeach them through the back door," the then majority leader Aden Duale said.

As if in a united front, Minority leader John Mbadi held the same opinion.

“I have decided to sacrifice political expedience and do what is right. I have had issues with Rotich on performance but on this one, I don’t find anything Rotich did which was wrong,” Mbadi said.

Frustrated MPs from the sugar-growing counties of Western and Nyanza regions supported the report, saying the over-importation of sugar was killing the industry.

Homa Bay woman representative Gladys Wanga had proposed three sweeping amendments to the report to hold Rotich responsible for failing to specify the quantity and quality of sugar that was to be imported during the duty-free window in 2017.

Wanga further wanted firms that imported the sugar to be punished and for all imported sugar to be thoroughly tested for heavy metals, including mercury, lead and copper.

On the Covid-19 funds, the MPs indicted themselves for failing to hold those involved in the misuse of taxpayers' money accountable.

The joint committee ordered forensic audits into the misuse of funds but yielded no concrete proposals on holding those found culpable responsible.

In the scandal, some Sh17 billion remain unaccounted for at Kemsa.

Auditor-General Nancy Gathungu said the validity and accuracy of Kemsa’s inventory balance, including pharmaceutical and non-pharmaceutical stocks, of Sh17.73 billion as at June 30, June 2020 could not be confirmed.

In her report to Parliament for the financial year ending June 30, 2020, Gathungu said Kemsa procured Covid-19 items amounting to Sh7.6 billion, out of which stocks valued at Sh1.9 billion were issued, leaving a Sh5.6 billion balance.

During the probe by the joint committee, some suppliers admitted to receiving payments from Kemsa for items they never supplied or even tendered for.