Magoha: We released capitation fee at the beginning of term

Magoha said services must be delivered effectively to enable children get quality education.

• Instead, Magoha said they are keen to ensure there is value for money to enable students get quality education.

• With less than two months remaining for President Uhuru Kenyatta’s tenure to come to an end, Magoha warned education officials against laxity on duty. 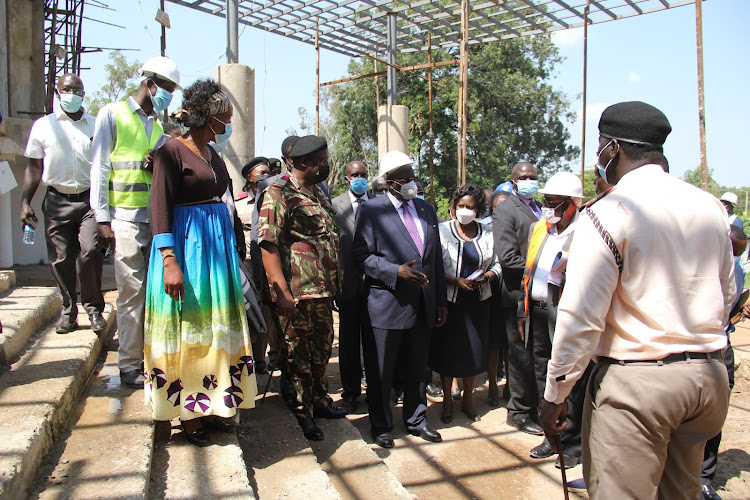 Education Cabinet Secretary George Magoha wants teachers to focus on their duties considering that the government had released capitation fees amounting to Sh16.9billion.

Magoha said some school heads were still complaining in the media that their schools had not received the money yet the ministry had disbursed the funds for the current term.

The cabinet secretary said the government disbursed the capitation fund in April.

He told teachers to focus on their duties and utilize public funds prudently to achieve the objectives.

“It’s good to say the truth so that you don’t misinform people. We issued the money at the beginning of the current term,” Magoha said.

Instead, Magoha said they are keen to ensure there is value for money to enable students to get quality education.

Speaking when he toured the ongoing construction of a Library and Resource Centre at Ogande Girls High School, in Homa Bay, on Wednesday, the CS argued that some officials may take advantage of the little time for the Jubilee administration in power and misuse the funds.

Magoha said services must be delivered effectively to enable children to get quality education.

“Mogoha is still the cabinet secretary in charge of education until I hand it over to another person. I won’t give anyone room to misuse public funds,” he added.

On the Competency-Based Curriculum, the cabinet secretary said the new curriculum must be implemented as planned.

He admitted that there are some challenges that the curriculum is facing but they cannot deter its implementation.

In the company of Principal Secretary for Basic Education Julius Jwan, Homa Bay County Commissioner Moses Lilan and Homa Bay director of Education Eunice Khaemba, Magoha said they will continue to train teachers to undertake the implementation of the CBC programme.

“There is no government that will have enough teachers in Kenya but learning must continue. The issue of teacher shortage should not be viewed as an obstacle to CBC implementation,” he added.

If private schools adopt this idea, learners will transit to the same school for junior secondary.
News
4 days ago

Unscrupulous officials feared to have been siphoning billions meant for the colleges.
News
1 week ago
WATCH: The latest videos from the Star
by ROBERT OMOLLO
News
22 June 2022 - 20:32