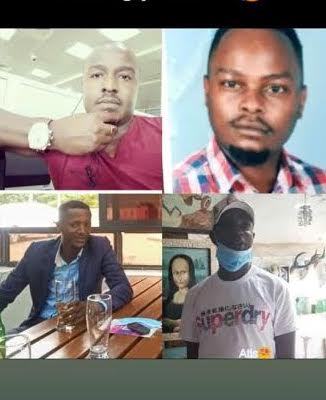 From Lef; Elijah Obuong, Brian Oduor, Benjamin Imbai and Jack Ochieng whose bodies were discovered in Muranga in April 2021

The Kasarani incident has elicited memories of the Kitengela four men who went missing on April 19, 2021, before their bodies were recovered later on.

Their car, a white Toyota Mark X, was found abandoned in a parking lot about 500 metres from the club the following day.

The bodies were found in a river in Muranga days later. They were apparently picked up from Kitengela and killed before being dumped in the area.

On April 30, 2021, Inspector General of Police Hilary Mutyambai said a special unit had been formed to investigate the disappearance and killings of the four men

Mutyambai said he had ordered the Directorate of Criminal Investigations to within a month investigate the incident and give him a report.

“This morning, I directed the DCI homicide team to investigate this matter in order to get to the bottom of it. The team has already begun its work and will be expected to report to the IG on the entire matter within a month,” he said.

The report of the findings was not made public. It later emerged almost all the victims had been arrested and charged with various crimes and their cases were pending in courts.

Police are also investigating up to 50 cases of bodies found in various places in the country in the past years.

The places include River Yala, Tana River, Athi River and thickets and forests.

Some of the victims had been linked to poaching, robbery with violence and fraud.

Police say the cases are still under investigation.

Police spokesman Bruno Shioso said they are determined to solve all those pending cases.

“We are actively involved in some of these cases like the Yala ones. We will solve them with time,” he said.

He promised a professional probe into the issues.

They sprinkle the drug into the drink of men too drunk to notice
Sasa
1 month ago
WATCH: The latest videos from the Star
by CYRUS OMBATI Chief Crime Reporter
News
22 June 2022 - 21:28