•Kimutai faulted NMS for failing to consult with the matatu owners and holding forums with non-players in the public industry.

•The chairman said the test run will remain a failure due to the unavailability of holding grounds which are meant to be provided by the county government. 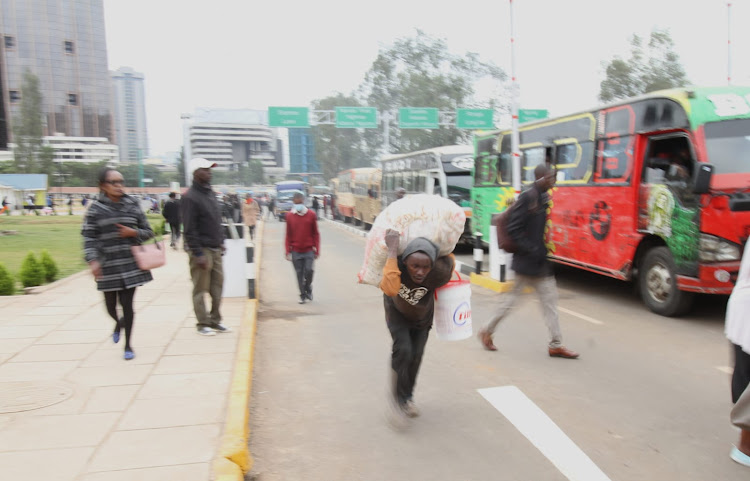 A man carries a laggage towards the Nairobi Green Park Terminus on June 22,2022.Photo/Enos Teche

Even before Wednesday noon, the matatus were back to their initial stages in the Central Business District.

The five-day test run was supposed to run until June 26, when further communication would be given.

“The city planners did a poor job and it is evident that Nairobi does not have transport planners,” Kimutai said.

He said the terminal was placed on the wrong side, which will result in more congestion

Kimutai faulted NMS for failing to consult with the matatu owners and holding forums with non-players in the public transport industry.

“Consultation is key and without it, this city will not move away from congested roads,” he said.

The chairman said the test run will remain a failure due to the unavailability of holding grounds, which are meant to be provided by the county government.

As early as 6am, police had been stationed at the Bunyala roundabout where they diverted all matatus heading to Upper Hill.

However, matatus from South B, Imara Daima and Mombasa Road used Enterprise and Lusaka roads at the Nyayo Stadium roundabout to Jogoo Road roundabout, Ladhies Road to get into CBD.

Matatus from Langata Road will come until Nyayo Stadium, then turn left and come through Uhuru Highway to Bunyala roundabout where they will turn left and take Lower Hill Road.

From Lower Hill, they will join Haile Selassie Avenue, and turn left to get a new U-turn which has been constructed to filter traffic and make another U-turn to the Green Park.

On the other route, matatus will head to the Mortuary Roundabout and join Ngong Road and take the normal road to Kenya National Library and NHIF area and enter the Green Park through the dedicated lane. 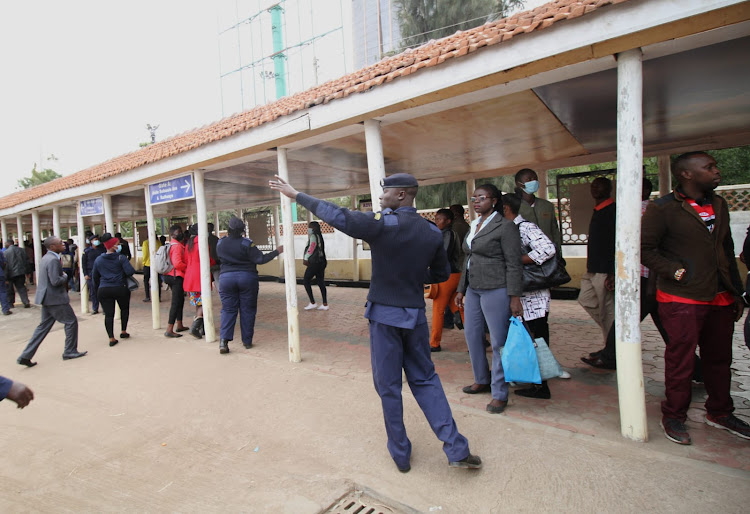 Matatu operators said the test run has challenges which affect them directly and interferes with the daily seamless operations.

Driver John Akama said they were taking a lot of time to get into the terminal as compared to their normal stage where they drop and pick at the same spot.

They said another challenge was the lack of passengers, especially in the morning hours.

The operators decried that once they dropped off commuters in the morning, there were no passengers within the terminus hence leaving empty.

“Unlike our initial stages, at Green Park commuters have been very few this morning and yet we are not allowed to camp. We leave without any commuters,” Julius Wafula said.

Despite the challenges and temporary operations at Green Park, matatu operators said the fare remained the same.

“Fuel prices are high and lowering the fare will be a loss to us. Therefore the fare remains,” John Otieno said.

Many commuters were forced to trek to the CBD.

“I was not aware of the test run. Matatus have been diverted towards Upper hill and we have been told to alight at the terminus. I have to walk to Koja to board a matatu to Parklands,” Allan Okumu said.

“I have been dropped here and I have to look for another means to get to Gikomba. This means I will have to spend more money,” Aisha Wanjiku, a trader said.

To enter the CBD, commuters from the terminus have to cross the Uhuru Highway just right after the Haile Selassie Roundabout.

With traffic police controlling the flow of vehicles, the commuter from the terminus appeared abandoned as they tried to cross the busy road.

Once the matatu dropped off the passengers, they exit the terminus where they have a dedicated lane along Uhuru Highway to Kenyatta Avenue-Uhuru Highway Roundabout and join Valley Road to their destination.

This is part of the regulations applicable at the terminus that was released by the NMS.

As part of the regulations by NMS, all vehicles using it will have a maximum of 20 minutes to drop off and pick up passengers.

For uniformity, utilisation of Green Park will see the comeback of discipline among the Sacco members

With the test run, no matatu was to be allowed to operate from the Railway Terminus which has been closed indefinitely.

Matatus were to be locked out of Kenyatta Avenue and City Hall Way for the next five days.

There is a matatu stage along Kenyatta Avenue outside General Post Office which mostly has PSVs plying on Ngong Road via Valley Road while the Kencom stage also uses Ngong Road.

Matatu Owners Association criticized the test run stating that the terminal itself was already a failure.
News
3 days ago

No matatu will be allowed to operate from the Railway terminus during the test run.
News
4 days ago

Commuters shared their frustrations, citing inconveniences caused by the exercise.
Counties
4 days ago

The exercise will continue until June 26 and happen in phases when further communication will be given
Counties
4 days ago
“WATCH: The latest videos from the Star”
by MAUREEN KINYANJUI News Reporter
News
22 June 2022 - 22:00