Nairobians cannot be dictated on who to elect - Ruto

He made the remarks at Ngong racecourse during the Nairobi county economic forum.

•Ruto said they are not going to succumb to threats from some quarters that are after installing their projects.

•He said those placing hurdles on Sakaja's way will not succeed and instead will be shocked. 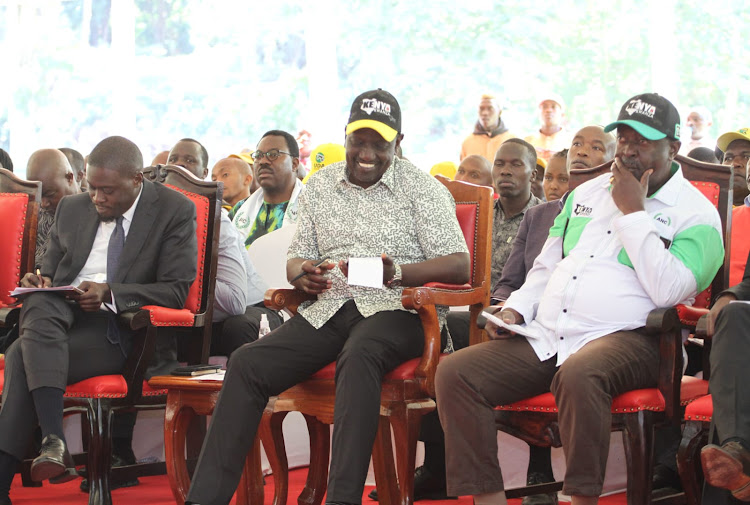 Ruto reminded those putting up spirited fights to ensure Sakaja is locked out of the August elections that they will not succeed.

Speaking when he led a section of Kenya Kwanza leaders for the Nairobi economic forum at Ngong racecourse, the DP said they are not going to succumb to threats from some quarters that are after installing their projects.

“There is no way in the 21st century that the people of Kenya can accept a puppet to be imposed on them in Nairobi or in Kenya,” he said.

Ruto added, “On August 9, chest thumbing and insults will end, we want to tell them there is only one way and that is the democratic route to a peaceful Kenya”.

He said there will be an election and that people will make a choice, not about personalities but programs, agendas and manifestos.

“We must say no to the use of young people to cause conflict or perpetuate violence by people who want to get to power using every means possible.”

The forum was aimed at collecting views from the residents on the state of the county's economy in a bid to prioritize the needs.

“This year's manifesto will be written together with the common citizen. We want it to cover speak for every stakeholder in Nairobi and enrich it so that everyone is proud of it.”

His running mate Rigathi Gachagua on his part represented the coalition at a similar forum in Kirinyaga.

Ruto also held rallies at Mlango Kubwa, Huruma and Mathare among other areas during his tour of the city.

He sought to popularize his bid while campaigning for the Kenya Kwanza leaders from the county.

The presidential candidate who was accompanied by ANC party leader Musalia Mudavadi among other leaders also urged voters to consider what they will get in return once they elect a leader rather than voting to give one a chance to be in power.

He termed his bottom-up economic model as one that will greatly help everyone including those at the top.

Mudavadi on his part said they want to win the election in round one.

"When are you going to stop using violence as your tool for seeking power?" DP Ruto.
News
1 week ago

You're a beneficiary of Raila's politics, Mudavadi told

Says ODM leader has given Luhyas a fair deal compared to what Ruto is giving them
News
1 week ago
WATCH: The latest videos from the Star
by MELINDA KIRWA and FELIX KIPKEMOI
News
21 June 2022 - 23:46