Says every Kenyan must feel secure in their country 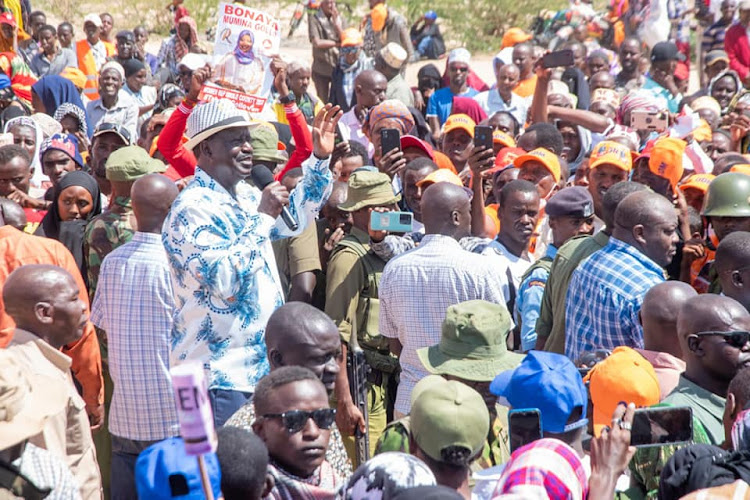 He said restoring security in the region that has suffered from perennial bandit attacks, will be one of his priorities if elected president.

The ODM boss spoke on Tuesday during Azimio rallies at Merti and Garbatulla in Isiolo.

He said he will lay down concrete strategies to stop the conflicts, that have led to death and loss of properties.

Raila called on the region to back his presidential bid saying Azimio coalition has practical solutions to their problems.

“I will ensure security is restored. We cannot live in a country where insecurity is the order of the day. Every Kenyan must feel secure in their country,” he said.

Isiolo has been experiencing rising inter-communal conflicts fuelled by illegal weapons, posing a serious security threat in the region.

The Azimio flagbearer who is one of the frontrunners in the State House race also promised to address the historical water problems in the region.

He said he will turn Isiolo into a world-class economic zone, capitalising on its strategic gateway between northern and southern Kenya.

“Water is life and a right to all citizens. We don’t want to see people walking 50kms in search of water,” Raila said.

The ODM boss also lobbied the government for relief food as a short-term solution to the urgent food crisis in Isiolo.

Atwoli called on the region to shun politicians pushing for the bottom-up economy.

He said the model spearheaded by Deputy President William Ruto will worsen the current economic situation.

The Cotu boss said Raila has adequate experience to turn around the country’s economy and ensure it realises its economic potential.

“Bottom-up is a fallacy. There is no economy that can grow from the bottom. Only Raila can fix the country’s economy,” he said.

Murathe termed Ruto’s promises as unrealistic saying the DP has a record of unfulfilled promises dating back to 2013.

“Raila is more believable over Ruto who has been in government from 1992 but has nothing to show,” he said.

The former Prime minister is seeking to strengthen his grip in Isiolo.
News
4 days ago

He promised to help the residents realize the economic potential of Isiolo County.
News
4 days ago

He said Ruto had what it takes to become a president.
News
1 week ago

Murathe said Uhuru opted for handshake with Raila after realising things were not working out well under UhuRuto union
News
4 months ago
“WATCH: The latest videos from the Star”
by LUKE AWICH Political Reporter
News
21 June 2022 - 23:00