Mudavadi asked state officials to stop being forced to campaign for Raila saying that they have the right to choose not to be used by the state house.

• He insisted that the President should let Kenyans choose who they want, as their next Commander-in-chief. 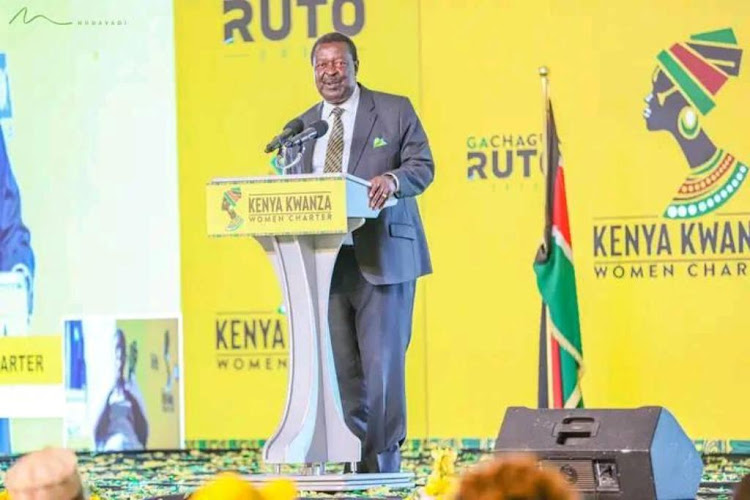 Addressing a rally in Bungoma on Friday, Mudavadi trashed Uhuru’s move to back Azimio presidential candidate Raila Odinga to succeed him.

He insisted that the President should let Kenyans choose who they want, as their next Commander-in-chief.

“Uhuru has only one month remaining to leave office, he has really destroyed the country’s economy with his handshake with Raila Odinga,” Mudavadi said.

The ANC leader urged the western region to back Kenya Kwanza Presidential flag bearer, saying that if Ruto wins the August election the hustler government will inject Billions to revive ailing industries, which will in turn create jobs for youths.

Mudavadi asked state officials to stop being forced to campaign for Raila saying that they have the right to choose not to be used by the state house.

“The state house should not force chiefs, DCC’s and County commissioners to campaign for Raila Odinga they must perform their duties in line with the constitution of Kenya.”

He said that the head of state has no political muscle and could not convince his area MCA and MP to join Azimio la Umoja One Kenya Alliance.

Mudavadi noted that the machinery and strategies that Uhuru has put in place will fail, assuring that Ruto has done enough campaigning.

Bungoma Senator Moses Wetang’ula said that Kenya Kwanza has traversed the entire country and people have accepted that Ruto will take over the government.

“We have traversed the whole country and everywhere we go its bottom- up, we are going to beat Raila Odinga hands down in the forthcoming polls,” he said.

The two leaders said the first task Kenya kwanza will execute if elected in August is to lower the cost of living and provide subsidy to farm inputs for small scale farmers.

Ruto in Vihiga as ANC, UDA candidates fight for supremacy

The DP is set to start his rally in Kidundu stadium in Vihiga county.
Counties
1 week ago

Ruto: Mudavadi, Wetangula suggested 95% but I chose 70% in our deal

He said it is Mudavadi and Wetangula who set the conditions.
News
2 weeks ago
WATCH: The latest videos from the Star
by TONY WAFULA
News
19 June 2022 - 12:42