Kabogo: Gachagua is a dictator, I warned Ruto not to pick him as deputy

•The ex-governor who has seemingly fallen out with Gachagua said he told the DP the Mathira MP will cost him some votes.

•Kabogo made the remarks when addressing his supporters in Thika on Thursday. 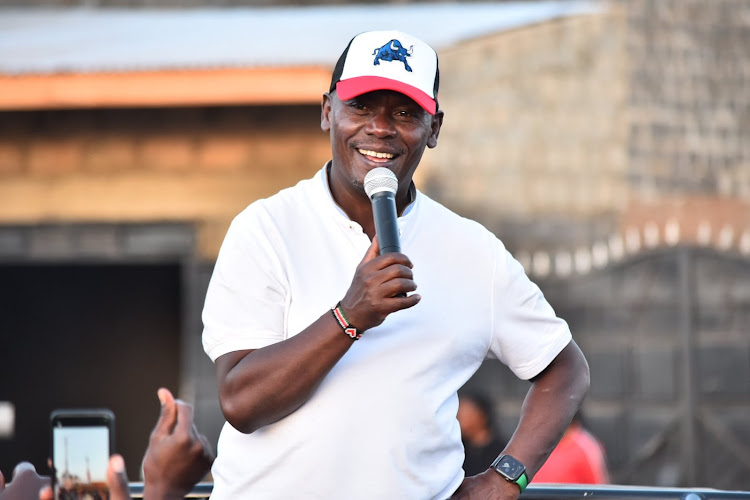 The ex-governor who has seemingly fallen out with Gachagua said he told the DP the Mathira MP will cost him so many votes.

Kabogo made the remarks when addressing his supporters in Thika on Thursday.

He went bare-knuckle on Gachagua accusing him of being the mastermind of woes facing fringe parties, from the Mt Kenya region, that are members of the Kenya Kwanza Alliance.

Loosely translates to: "Before Gachagua was picked as Ruto's running mate, I opposed. It is after he was picked that our relationship with UDA deteriorated. It is because that man is a dictator. My problem is talking the truth because I told Ruto Gachagua will cost him votes".

Kabogo went on to accuse Ruto and the UDA party of planning to dwarf Mt Kenya fringe parties.

He hinted at charting his own political path after he ostensibly told Thika residents that he had come for their blessings.

Says they can't do much if they do not have a team supporting their agenda.
News - Page 8
5 months ago

Loosely translates to: " I am back here because I want to start my journey afresh. I don't like starting something afresh without the blessings of my home. I have seen Ruto and his UDA party want to swallow fringe parties. I have refused to be swallowed".

The Former Kiambu Governor also cast aspersion on the suitability of Gachagua as a Deputy President.

He dismissed the possibility of him succeeding DP Ruto as President saying he is the Mt Kenya region kingpin.

Kabogo and CCK party leader Moses Kuria are also in the race for the Kiambu governor seat in the Kenya Kwanza Alliance camp.

The two leaders have openly expressed their reservations about the manner the UDA has been handling them and other fringe parties from the Mt Kenya region.

The two in a joint statement cited bias and intimidation by the UDA party.
News
5 months ago

Kabogo and Kuria on Thursday announced they have withdrawn from the UDA campaigns citing unfair treatment and intimidation by the UDA party.

"Following the unfortunate incident of June 15,  the Tujibebe Wakenya party and Chama Cha Kazi parties have decided to pull out of the UDA caravans as they are clearly set up to embarrass other parties and demonise the Kenya Kwanza Alliance as a coalition," read in part the joint letter signed by secretaries-general Gathii Irungu (Tujibebe) and James Nage (CCK).

"It is clear from the foregoing that a decision has been made by some quarters that parties with a strong footing in Mt Kenya region are not wanted in the Kenya Kwanza Alliance," the two added in their letter dated June 16.

They requested a meeting of the alliance to iron out the sibling rivalry.

Trouble began after Kabogo was embroiled in a public spat with Wamatangi at a rally in which Gachagua was leading in Kiambu county on Wednesday.

Kuria reacted to the two's standoff saying though the incident was regrettable, the UDA party had plotted to embarrass them while on the campaign trail.

"I will not apportion blame to any of the two gentlemen but I can relate to Kabogo's pain. For three days the UDA leadership has been meeting UDA MP and MCA candidates to plot how to embarrass Kabogo and me during the tour.," he said on a Facebook post on Wednesday evening.

Kuria added that the MCAs and MPs who associate with them were warned of dire consequences.

"This chicanery is not healthy for our fledgling alliance. It is imperative that we live with not only the letter but also the spirit of the Kenya Kwanza Alliance," he added.

On Thursday, the two leaders gave Gachagua's rallies in Kiambu a wide berth.

They spent time together during which they ostensibly resolved to write a protest letter to the Kenya Kwanza Alliance over the alleged mistreatment.