Sakaja: Uhuru is doing everything to finish my career

He maintained he meets all the pre-requisite requirements to run for governor.

•Sakaja, who appeared for the hearing of the case challenging his university degree on Wednesday, turned the heat on President Uhuru Kenyatta saying he is the mastermind of his woes.

•He labelled the Head of State as a traitor accusing him of fuelling attempts to lock him out of the Nairobi Governor race. 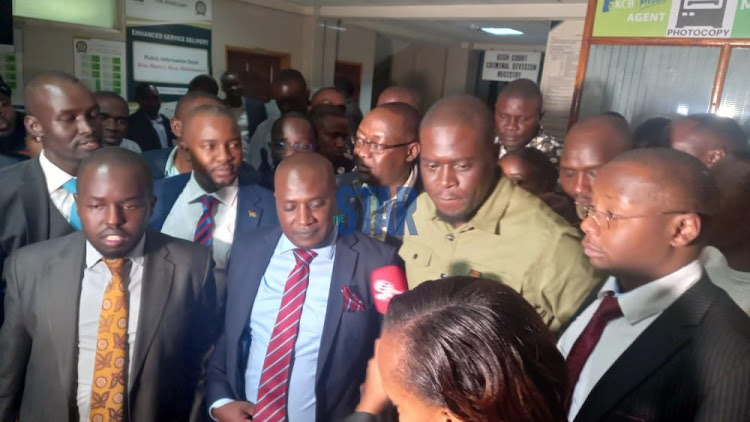 As he awaits the verdict of a petition challenging his clearance to vie for the Nairobi governor seat, senator Johnson Sakaja has exuded confidence he will be on the ballot come August 9.

Sakaja, who appeared for the hearing of the case challenging his university degree on Wednesday, turned the heat on President Uhuru Kenyatta saying he is the mastermind of his woes.

He labelled the Head of State as a traitor accusing him of fuelling attempts to lock him out of the Nairobi Governor race.

“For the first time today, I have addressed my former party leader who is the president and a man I respect,"  Sakaja said.

“Even before I was chairman of TNA, I did everything in my ability for his career but now he is doing everything in his ability to finish mine.”

Sakaja was addressing the media after the conclusion of the hearing of his case at Milimani Law Courts that run late into Wednesday night.

He maintained he met all the pre-requisite requirements to run for the office of the governor.

“Today we have seen the levels the 'System' has gone to try to stop my candidature including sending ministry officials to intimidate this commission (IEBC), which has remained unshaken," he claimed.

Sakaja’s candidature for Nairobi Governor hungs in the balance after four petitions were filed with the IEBC’s Dispute Resolution Committee.

The cases challenged the credibility of the academic papers he presented to the commission for clearance.

During the hearing, his lawyers successfully pushed for the dismissal of three cases whose complainants were not present in court.

The three cases were filed by Evans Kaita, Alex Abere and Elizabeth Nzisa.

A case filed by Dennis Wahome was the one heard and the judgement has been set for Sunday at 2 PM.

Sakaja seemed to have deployed all his arsenals to have his name on the ballot stayed.

As the hearing of the case at the IEBC committee was on course, Sakaja had already moved to the High Court to fight revocation of recognition of his degree by the Commission for University Education.

The move handed him a reprieve as the High court in a Judicial review suspended the Commission for University Education's decision to revoke the recognition of Sakaja's degree.

The court directed CUE to maintain the validity of Sakaja's degree pending further direction by the court.

"An Order of Certiorari to remove into this honourable court and quash the decision of the Commission for University Education Made on 14th June 2022, revoking the recognition of the applicant's(Sakaja) degree from Teams University, Kampala, Uganda," the court reads in part.

The High Court also blocked the IEBC from striking out the name of Sakaja from the list of candidates cleared to vie for the governor seat.

The electoral committee also expunged from its record the letter attached from CUE.

In the wake of numerous hurdles standing his way, Sakaja has remained defiant that he will conquer all.

"I would tell them that the people of Nairobi know it is the time of revolution and they won't accept a state project. I have stood by the residents for the past 5 years and I know what they deserve,” he noted.

The Senator called on his supporters not to lose faith in him stating that their journey to City Hall is still on.

“To my supporters and team players, It is well because there is a God. Our match is unstoppable and so is our faith and our victory is inevitable."

"I have the qualifications to vie for Governor of Nairobi and will be on the ballot," Sakaja insisted.
News
1 week ago