A degree from where? Ruto questions Raila's qualifications

"Raila should show us where he schooled and his classmates," Ruto said.

• Ruto insisted that the Azimio la Umoja One Kenya Alliance candidate cannot prove what he studied, but claims to have a degree.

• "I want to ask the people of Azimio, what did your candidate study, where did he school and who taught him?" 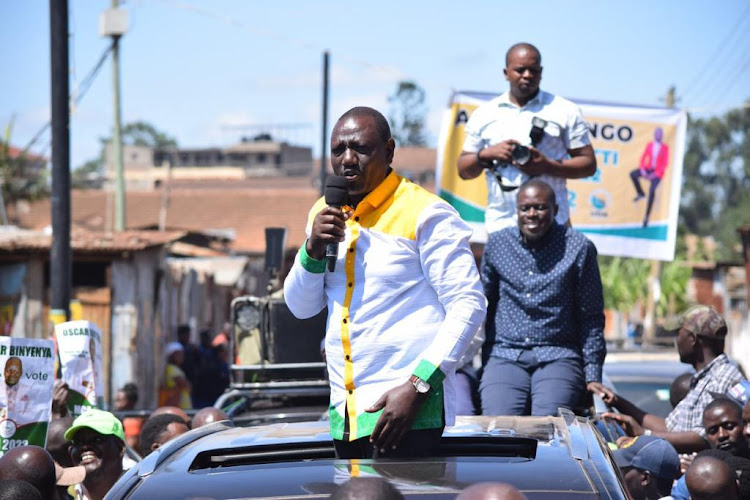 Deputy President William Ruto speaks to residents of Gatina in Kawangware after attending a Church service as Gubernatorial candidate Johnson Sakaja stares at him on Sunday, June 5, 2022.
Image: FILE

Speaking in Manga, Nyamira on Thursday, Ruto said that the former Prime minister should give proof of where he schooled, his classmates and his teachers.

"If there is anyone with questionable academic credentials, it is your Azimio presidential candidate," the DP said.

"Before you tell us anything, your presidential candidate Raila should show us where he schooled, his classmates and who his teachers were. Stop the conmanship," he added.

Ruto insisted that the Azimio la Umoja One Kenya Alliance candidate cannot prove what he studied, but claims to have a degree.

"I want to ask the people of Azimio, what did your candidate study, where did he school and who taught him? You cant answer all that yet you want to tell us he has a degree? from where?"

On Tuesday, UDA secretary-general Veronica Maina poked holes into Raila's academic credentials, saying that qualifications for public office holders need to be looked at from a wider public view.

"Questions have also been cast on the credentials of presidential candidates. You have seen a lot of headlines questioning the university that our biggest opponent Raila Amollo Odinga qualified from, and it becomes a big question that needs to be looked at not through the lenses of just one candidate, but a wider public question," she said.

On Wednesday, however, the IEBC said that the former Prime minister met all the requirements and is qualified to vie for the country's top seat.

Speaking on NTV, the electoral body's CEO Hussein Marjan said IEBC did its due diligence and was satisfied before clearing Raila Odinga to vie for the presidency.

Bungoma senator Moses Wetang'ula who had accompanied Ruto said added that the person whose academic qualifications should be investigated is Raila and not senator Johnson Sakaja.

The Ford Kenya leader said they worked with Raila in previous elections but never saw his certificate.

SG Maina said the issue of qualification for public office holders shouldn't be looked from individual level.
News
1 week ago

He has reportedly presented a degree certificate from Uganda showing he graduated in 2016.
News
1 week ago
WATCH: The latest videos from the Star
by BRIAN ORUTA Digital Journalist
News
16 June 2022 - 13:16