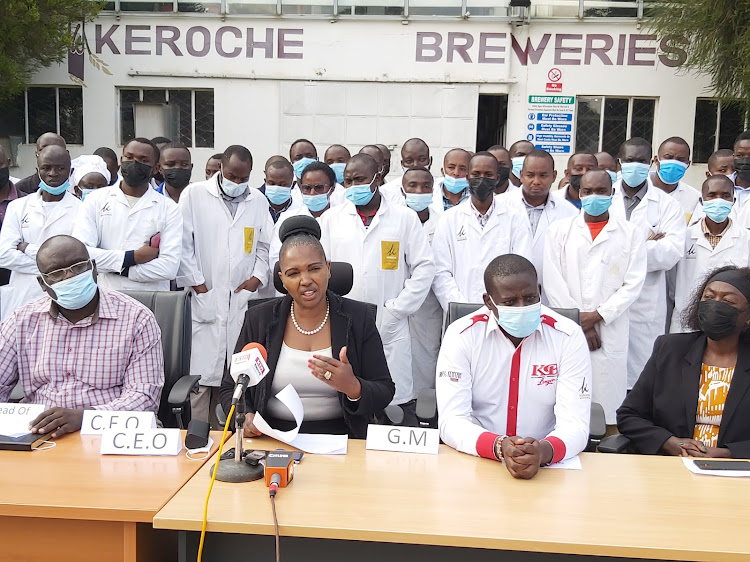 Keroche The CEO Keroche Breweries Tabitha Karanja flanked with her staff addressed the press after KRA closed down the Naivasha based company over a new tax row.
Image: George Murage

The tax row between Keroche Breweries and KRA looks far from over after the latter yet again closed down the factory over fresh tax arrears.

This is the sixth time in one year that KRA has closed down the Naivasha-based company leaving it to incur losses running to millions of shillings.

And this time around, the company is accusing KRA of being used to fight it politically and issuing agency notices to all its lenders.

In March, KRA closed the brewery over Sh300m tax arrears but this was resolved a couple of weeks later with fresh and harsh terms and conditions.

According to the company CEO Tabitha Karanja, efforts by the company to seek more time to pay the arrears had hit the wall.

Addressing the press in the factory on Tuesday, she said that over 400 workers faced the sack while beer worth over Sh350m could go to waste.

Flanked by her workers, she said that KRA behaved in a manner that was scandalously oblivious of the need for business resilience to overcome a combination of challenges.

“During the Covid-19 pandemic, the brewery was closed for two years because of the measures enforced to contain the spread of Covid-19 and we incurred tax arrears of Sh322m,” she said.

Karanja attributed her woes to the move to join politics through UDA adding that this would not stop her intentions to vie for the senatorial seat in Nakuru.

“KRA is under tremendous pressure to place Keroche Breweries under existential jeopardy in order to retaliate against me for my interest in offering political leadership in Nakuru,” she said.

She questioned the move by KRA to issue agency notice to several banks noting that this had shut down all their operations and plans to get financial support.

“KRA has issued agency notices to the company’s bankers and instead of correctly notifying the banks of the Sh30m we owe, it gave a wrong figure of Sh558.7m,” she said.

She noted that this had occasioned the company prejudice adding that their efforts to secure a hearing from the top-level management at the KRA remained unsuccessful.

Karanja appealed to KRA to give the company a moratorium on the enforcement action that shut down their operations and a review of the unsustainable payment plan.

“I plead with the KRA to afford us an opportunity to regain our footing as a manufacturer, employer and a local entity in order to sustainably meet all our obligations” she said.

He was not a gold-digger like her exes, she said
Sasa
5 months ago