Raila maintained he has the best manifesto for the country.

•Raila said he has served in government before and hence knows where money will come from.

•"We have good plans to improve Kenyans' lives. Youth will get jobs that befit their educational qualifications, not casual jobs," Raila said. 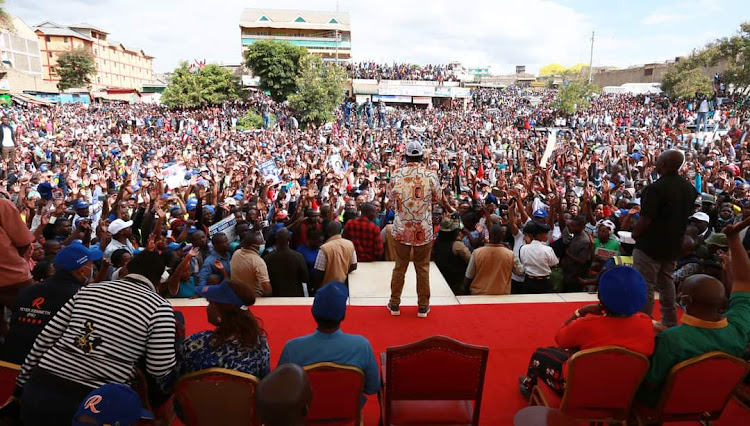 Azimio presidential candidate Raila Odinga has told off his critics who have questioned where his government will get the funds to implement his plans.

Raila said he has served in government before and hence knows where money will come from.

"Some people say that I am cheating. That the government has got no funds. I Raila Amollo Odinga, served as Prime Minister for five years," he said.

"Together with Kalonzo, we know where money is. We will get money from where corrupt leaders steal and help our vulnerable populace," Raila said.

Raila spoke during a political rally at Masii in Mwala, Machakos County on Sunday.

"We told you we were going to Canaan. We went to River Jordan where we found crocodiles. We retreated and I told Kalonzo that we build bridges. Now we have built already, we will cross River Jordan on August 9."

Raila said as from next year if Azimio forms the next government, there will be free education from nursery to university.

He also said his administration will introduce a social protection programme which will ensure Kenyans from needy families receive Sh6, 000 per month to cushion them.

Raila said single mothers will also get support from his administration.

He said his government will introduce Baba care to ensure children, youth, women and the elderly get access to affordable and available health care.

For those who can't afford to pay for NHIF, he said the government will pay for them.

"We have good plans to improve Kenyans' lives. Youth will get jobs that befit their educational qualifications, not casual jobs," Raila said.

Raila said those who want to start businesses will receive loans from the government.

They will start repaying for the loans after seven years grace period.

Those in the Jua Kali industry who don't hold credible academic qualifications will be awarded Recognition of Prior Learning certificates to be able to get tenders from the government.

He said all counties will have industries for farm produces' value addition.

"One County, one produce," Raila said.

Raila said his government will give priority to water provision in Ukambani counties especially Machakos, Makueni and Kitui.

"We will drill boreholes and construct dams and distribute water to homesteads in the counties using water pipes and taps," Raila said.

He said all poor roads in the Ukambani region will be tarmacked by his administration.

Ruto had written to the two bodies seeking the prosecution of 5 CSs and a PS.
News
2 months ago
WATCH: The latest videos from the Star
by GEORGE OWITI Correspondent - Machakos
News
13 June 2022 - 01:08