Chilling video shows woman being robbed at gunpoint in Rongai

CCTV footage posted online indicates that the robbery occurred at 2:20am.

•The second robber then unsuccessfully attempts to smash the passenger window with a machete.

•He then passes the machete to the gunman who smashes the driver's window with five strikes. 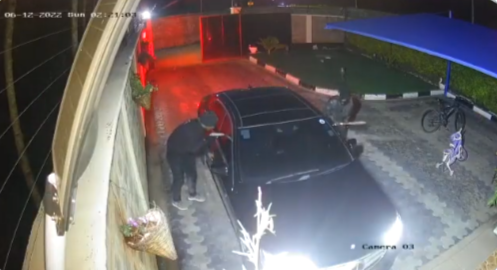 A screen grab of the CCTV footage of the robbery on Sunday, June 12, 2022.
Image: TWITTER

A woman was on Sunday robbed at gunpoint at her home in Gataka, Ongata Rongai.

CCTV footage posted online indicates that the armed robbery occurred at 2:20 am, on June 12, 2022.

In the chilling video, the victim was ambushed as she drove into her compound as soon as the gate was opened.

One of the robbers ran after a young lady who had opened the gate as his accomplice with a pistol went for the driver.

The gunman is seen pointing a pistol at the driver seemingly beckoning her to open the door before signalling at one of his accomplices for reinforcement.

The second robber then unsuccessfully attempts to smash the passenger window with a machete.

He then passes the machete to the gunman who smashes the driver's window with five strikes.

At this point, the thug who went after the lady who opened the gate re-emerged from the car park just as a fourth robber entered the compound from outside carrying what appears like an AK 47 rifle.

Outnumbered, the woman attempts to drive away, but then stops.

🙆‍♂️🙆‍♂️🙆‍♂️Robbery in Gataka Rongai
Ambushed in their own compound..1/2 pic.twitter.com/kXTeClgOE7

A scuffle then ensues between her and the robber with a pistol seemingly in an attempt to get her to open the door.

She finally obliges and opens the door after the gunman carrying the rifle threatens her severally.

She's then pulled out of the vehicle as the four begin ransacking the vehicle for valuables.

At this point, a fifth robber enters the compound carrying a flashlight.

Moments later, the sixth robber follows him as the gunman with the AK 47 pulls the woman towards her house.

The victim can be seen frantically trying to reason with the thugs to no avail.

The above ordeal took an average of two minutes.

A second CCTV footage capturing the lounge of the house begins at 2:22 am.

The woman is led inside her house by the hooded thug with a rifle.

One of the robbers goes inside the other rooms as a second one ransacks the TV stand for valuables.

All this while, the hooded gunman continues to harass the victim before his accomplice at the TV stand grabs her, pushes her on the couch and appears to slap her before pulling her shoes off her feet.

Two more robbers then enter the house, one carrying a flashlight.

The hooded gunman then pulls the woman to her feet and starts threatening her with his gun as the others shove her towards a room away from the CCTV view.

The 2:04 minute-long footage ends as the robbers continue ransacking the house as they pack valuables in a bag.

On Thursday last week, two robbery convicts who were captured on CCTV robbing a man in 2020 were handed life sentences by the court.

The culprits, Humphrey Minyatta and Timothy Muzami were captured on the surveillance tape robbing Paul Sewe Momanyi along Rose Avenue in Kilimani, on the morning of June 25, 2020.

It will hasten investigations of terrorism, murder, robbery with violence.
Counties
2 weeks ago

"We hope the sentence serves as a semblance of justice to Momanyi," DCI said.
News
3 weeks ago
WATCH: The latest videos from the Star
by EMMANUEL WANJALA Radio, Print & Digital Reporter
News
13 June 2022 - 11:06