The FIFA tournament is scheduled to take place from November 21 to December 18, 2022.

• Out of these, he said KDF and the National Police Service have each recruited 500, Kenya Prisons 61 while the Kenya Airports Authority has concluded interviews for 200 whom they intend to employ. 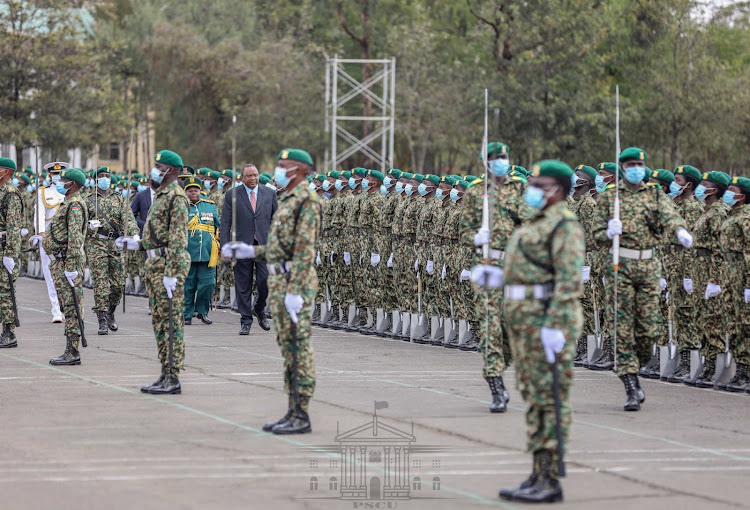 President Uhuru Kenyatta inspects a guard of honour during the pass-out parade of 9,464 NYS graduates at the Gilgil Training College on June 10, 2022.
Image: PSU

The government has hinted at helping NYS graduates to secure jobs in Qatar during the forthcoming World Cup.

The FIFA tournament is scheduled to take place from November 21 to December 18, 2022.

Speaking Friday during the pass-out parade of 9,464 graduates at the Gilgil NYS Training College, President Uhuru Kenyatta said the government has since last year placed 2,649 graduates into employment.

Out of these, he said KDF and the National Police Service have each recruited 500, Kenya Prisons 61 while the Kenya Airports Authority has concluded interviews for 200 whom they intend to employ.

"This does not include the 700 that have already been employed by the NYS itself," Uhuru said.

"We are very hopeful that as the World Cup is coming, a good number of you will hopefully also be able to get jobs in Qatar during that period," Uhuru added.

He congratulated the graduates and asked them to practice to a tee what they learned during training.

"Congratulations and I trust that you will take the skills, practices, attitudes as well as the values that you have gathered from your training and use them to forge a brighter future for yourselves," Uhuru said.

The President called on employers to take advantage of the competitive edge NYS graduates have and absorb them in their respective establishments.

The 9,464 new NYS graduates join some 130,000 others who have achieved the same feat under the Jubilee administration.

The President lauded the transformation that the service has undergone over the years and enabled it to achieve huge milestones.

This, he said, includes the control of locusts across 13 infested counties and the revamping of the old railway line.

The President noted that the annual youth recruitment into the youth service has increased from 4,000 in 2013 to 30,000 at present.

He said this has resulted in the recruitment of 118,189 youth from all across all sub-counties over that period.

This number, Uhuru said, is equivalent to all the youth that were recruited into the service between 1964 and 2012.

"And we are very proud of this fact," Uhuru said.

He said among other NYS achievements is the drilling of over 68 boreholes, construction of over 197 water dams, 217 water pans, 96 ablution blocks, and three social halls.

Raila: My promise to the Kenyan youths

Revamped NYS should build partnerships to be sustainable