They died in a chopper crash alongside two pilots and two bodyguards on June 10, 2012.

• Investigations later revealed the crash, deep inside Kibiko forest, happened shortly after 9am, just ten minutes after taking off from Wilson Airport.

• On the controls were Captain Luke Oyugi and Nancy Gituanja. 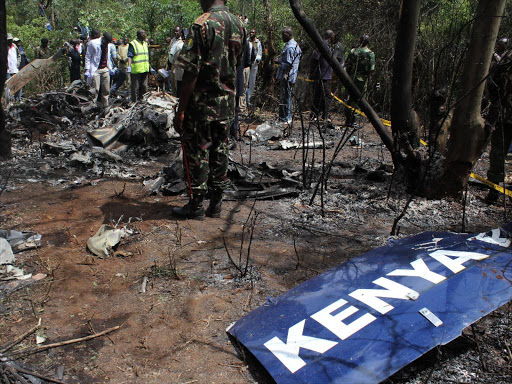 Ten years ago today, Kenya was thrown into mourning following news that then Internal Security minister George Saitoti and his assistant Orwa Ojode had perished in a horrific helicopter crash in Ngong.

They died alongside two pilots and two bodyguards on their way to a Harambee in Ndhiwa, Homa Bay County on the chilly Sunday morning of June 10, 2012.

On the controls were Captain Luke Oyugi and Nancy Gituanja.

The chopper they were travelling in was a police helicopter, a Eurocopter AS-350 model.

Investigations later revealed the crash, deep inside Kibiko forest, happened shortly after 9 am, just ten minutes after taking off from Wilson Airport.

The helicopter exploded on impact.

A commission of inquiry led by then Justice Kalpana Rawal was formed to investigate the incident.

The probe team was told the chopper had a normal trajectory six minutes after takeoff but the control tower at Wilson Airport had lost total communication with the two pilots.

The team also heard that for three minutes before the helicopter went down, there was no pilot input.

While presenting its report in October 2012, the commission presented several theories on the cause of death of the victims.

Pilot error was one of them. The commission said Oyugi and Gitwanja were not fully experienced to fly in bad weather.

The inquiry also said the helicopter’s battery was not properly maintained and could have caused the fire if it was overcharged.

But even more, what was more chilling was the commission’s revelation that Saitoti may have suffered severe poisoning.

The doctors who handled the autopsy spoke of the presence of a cherry pink appearance on the bodies.

“Examination of all the bodies indicated a cherry-pink discolouration of body tissues, which is consistent with carbon monoxide poisoning. The normal colour usually takes a darker shade,” Njeru told the commission.

Njeru further said that the cherry pink was present in all major internal organs, meaning the poisoning from the deadly gas was severe.

Upon further probing by lawyer Fred Ngatia (for the Saitoti family), Njeru revealed that the poisoning was at least 30 per cent of the blood and tissues of the samples taken.

Such poisoning, she said, would normally cause drowsiness, fatigue and disorientation of a victim.

The forensic experts disowned a previous postmortem report by Dr Johansen Oduor, then a Government forensic expert, which failed to mention carbon monoxide poisoning in the victims.

It only indicated the death could have been caused by severe tissue injury.

A report by Assistant Government Chemist Joyce Wairimu Njoya, presented to the commission in early October 2012, indicated that tests on samples from Saitoti and Gituanja returned negative results but tests on Oyugi indicated that there was 68.6 per cent carbon monoxide poisoning.

Lawyers questioned how Oyugi could exhibit such high levels of gas poisoning while Gituanja, seated to his right, indicated no such poisoning.

The probe team also heard that traces of soot were found in the tracheas and respiratory systems of the deceased.

The above theory would later be given credence by investigations when it emerged that the chopper’s servicing 200 hours after it was flown from Johannesburg, South Africa, was not satisfactory.

It also emerged that Oyugi and Gituanja were not originally meant to fly the helicopter.

However, Saitoti’s death may have come as a surprise to all and sundry except himself.

The former vice president had days prior to his death told Parliament of an attempt to poison him.

Just two days to his demise, Saitoti while attending an MPs’ function in Mombasa, apparently refused to sleep in his room and booked a different hotel.

In an investigative piece by the then KTN journalist John Allan Namu dubbed ‘Death in Ten Minutes’, it emerged that Saitoti left his room 213 to his bodyguard and booked into a different hotel.

While it may never be known why Saitoti never slept in the room, the move painted the picture of a man living on the edge, afraid of something.

He was scheduled to table before Parliament a report on the illegal drug trafficking syndicate in the country.

Saitoti had planned to reveal names of those who were involved in the drug trade in Kenya, names we may never know.

He was also intending to run for president in the March 8, 2013, general election.

Worst air disasters in Kenya’s history, and how survivors cope

One of the worst air disasters that hit Kenya was KQ flight 431, which killed 169 people out of the 179 people on board.The aircraft crashed in the ...
News
4 years ago

A report by a commission of inquiry into the helicopter crash that killed Internal Security ministerGeorge Saitoti and his assistant Orwa Ojode has ...
News
8 years ago