Inverted nipples not a cause of concern — doctor

Says they do not necessarily make breastfeeding difficult, as the baby can latch over the entire areola.

•However, depending on the degree of inversion, a person may face challenges with breastfeeding or be unable to do so.

•An estimated 2–10 per cent of women have at least one inverted nipple, and men have them too. 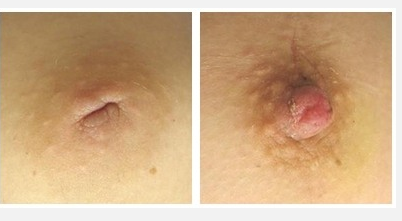 Every person was born differently and uniquely and we appreciate that.

However, others have some features that are different from others and sometimes it causes alarm while sometimes it is just a small difference.

Hilda(not her real name) was born with inverted nipples.

It is not something she knew existed as she has never heard of it before and so it did not bother her.

She says as she was growing up, she did not think much of it as she has never seen other types of breasts and thought it was normal.

She joined boarding high school (girls only) and that is when it hit her that her breasts and nipples were different.

“They had perfect nipples and always pointed out while mine were just hiding inside. At some point, I felt bad about it and it started bothering me if maybe I had a hidden problem,” she said.

Hilda said she could not share her sorrow with her parents or friends as it was embarrassing.

“I always tried to pull them out to no great results. I felt I was maybe abnormal and my nipples will never be like other peoples people's,” she said.

Her self-esteem was affected and at school, she started to bathe when no one else was in the bathroom as she did not want others to see her sunken nipples.

After she cleared high school and her dad bought her a phone, the first thing she googled was about inverted nipples, the effects and whether it was something that needed a visit to the doctor.

She felt relieved when she found out it was normal and she now felt free to discuss it with her friends and sisters.

She says she had to send them some articles to read so they don't end up thinking she had abnormal nipples.

Ann was also born with inverted nipples, and she noticed it when she was 16 years when her big sister was dressing up in her presence and noticed her nipples were much pointed out.

She wondered why her's were inside and she has never seen them out.

Her sister told her they will be after some years probably after 18 years old, although her sister's breasts were like that even under eighteen.

It was not something that bothered her.

Time flew and she got married in a few months.

She eventually gave birth to a daughter and that is when the thought of her inverted nipples became her new headache.

The milk was coming out but the baby was not able to suck as she had nowhere to hold on to when she was still months.

It was hard to breastfeed as her nipples were so inverted.

She had to look for other means to get the milk.

Dr Maina who owns a private hospital at Thika said that Inverted nipples are not a cause of concern.

“Inverted nipples can also be called retracted nipples. Some people are born with them, and others develop them later in life,” he said.

Both males and females can have them. Sometimes, only one nipple is inverted.

Inverted nipples do not necessarily make breastfeeding difficult, as the baby can latch over the entire areola.

However, depending on the degree of inversion, a person may face challenges with breastfeeding or be unable to do so.

An estimated 2–10 per cent of women have at least one inverted nipple, and men have them too.

Acquired inversion can indicate an underlying medical issue, such as inflammation of the breast tissue. People should see a doctor if one or both nipples invert in a short period.

Medical conditions that can cause nipple inversion include mastitis, which is an infection of the mammary gland, duct ectasia, which is an abnormal dilation of a duct in the breast tissue, and an abscess under the areola, complications of breast surgery and breast cancer.

Inversion is a normal variation in nipple shape, and it is usually not a cause for concern. Doctors agree that there is generally no need to treat inverted nipples.

“Many women are born with inverted nipples. About 10 per cent of them have at least one, and in most cases, it’s not caused by any other medical condition. It doesn't hurt or cause any specific problems,” he said.

However, a doctor may recommend treatment if the underlying cause of the inversion is harmful, such as a malignancy or inflammation of the breast.

Generally, if you’re born with inverted nipples, you don’t have to worry about them. But if an inverted nipple is a new thing for you, it’s worth getting checked.

He said sometimes pregnancy is the cause for this change, but rarely, an inverted nipple can be a sign of something more serious, like breast cancer.

Inverted nipples can also appear after breast surgery, breast trauma, during menopause, during or after mastitis, or even after breastfeeding that is if you experienced any scarring of your milk ducts.

It depends on how inverted your nipple is.

Nipples that are only slightly inverted may begin protruding more over time, especially as you go through the typical life cycle of female reproductive changes.

Physical changes, like changes in temperature or sexual arousal, may also temporarily affect the appearance of your inverted nipple or nipples.

If your inverted nipple is simply a genetic abnormality, you don’t need to do anything to treat it.

If you have strong feelings about the appearance of your inverted nipple or are worried about your ability to breastfeed in the future then you can see a doctor.

There are ways you can encourage a nipple to reverse its natural direction, though there’s no guarantee these will work or that you’ll be able to maintain the results.

The Hoffman technique, a manual therapy involving massage of the breast tissue and areola, the Nipple extractors or breast shells, like the lansinoh latch assist, which places reverse pressure on the breast tissue so the nipple protrudes and the suction techniques, similar to breastfeeding pumps, which draw the nipple out and away from the areola.

You can also opt for plastic surgery. There are surgical correction procedures and cosmetic injections which can turn your nipple outward.

There is no anatomical reason why a woman with inverted nipples cannot breastfeed.

The condition doesn’t affect your milk ducts, so you will still produce milk, and that milk will still be able to flow out from the nipple.

Midwives, lactation consultants, and other breastfeeding experts remind women that it’s called breastfeeding, not nipple feeding, because while the nipples play an important role, they are not the only body part responsible for successful feeding.

The act of breastfeeding itself can often be a treatment for inverted nipples.

The repeated force of your baby sucking on your breast during feedings can loosen the adhesions causing inverted nipples, allowing the nipple to protrude more over time.

There are several products you can use to make breastfeeding easier with inverted nipples:

Breast shields: Firm plastic cups or shells worn between feedings to keep the nipple in an outward position

Nipple shields: Flexible silicone devices are worn over your nipple and areola during feedings that simulate an erect nipple and make it easier for your baby to latch

Breast pumps: Used to stimulate the nipple before a feeding (before being swapped out for the breast) or used exclusively to feed your baby (via pumping and bottle feeding)

The effectiveness of breast shields in reversing nipple position may only be temporary, and nipple shields can interfere with your milk supply when used for more than a few weeks.

It’s a good idea to consult with your gynaecologists, midwife, or even an independent lactation consultant before using one of these strategies.

Remember, an inverted nipple has no effect on your milk ducts or on how much milk is produced or distributed to your baby.

If a nipple is inverted, it lies flat against the areola or goes inward instead of sticking out. The areola is the circular area of pigmented skin around the nipple.

How do inverted nipples affect sensitivity?

Nipple sensitivity varies from one person to the next, but a person with inverted nipples often experiences the same degree of sensation as a person with protruding nipples.

For most people, inversion does not affect nipple sensitivity.

When to see a doctor

However, if a person notices a change in the shape of their nipple, they should see a doctor; changes, especially those that occur over a short period, can signal an underlying health condition.

Massage them gently at least once a day in circular motion towards the heart.
Sasa
7 months ago

It is not unusual to change bra sizes within the first weeks of breastfeeding.
Sasa
11 months ago

Nightmare of a working mum: When Baby refuses the bottle