The forum aimed at appreciating the community's role in peace process.

•The two-day foruM aimed at appreciating the community's role in the peace process and developing a collaborative framework.

•On June 2, the imposed curfew in Marsabit was extended by 30 more days. 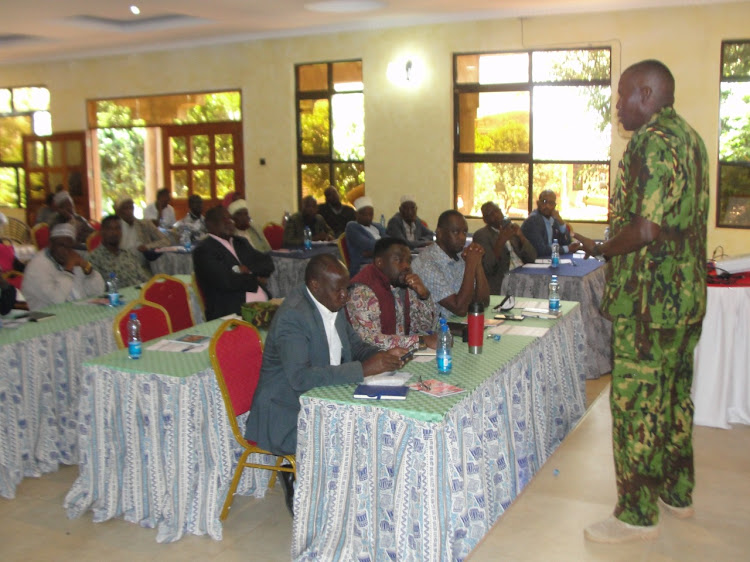 A multi-agency Security team joined the National Cohesion and Integration Commission for a stakeholders forum in Marsabit on Thursday.

The two-day forum was aimed at appreciating the community's role in the peace process and developing the collaborative framework for lasting peace ahead of the upcoming General Elections.

In attendance during the forum were representatives from Marsabit Interfaith Council, and various peace organizations among other stakeholders.

Speaking during the forum, the County Commissioner for Marsabit, Paul Rotich emphasized the need to continuously engage all communities and sensitize them on the importance of peaceful co-existence before, during, and beyond the General Elections.

He also encouraged communities in Marsabit to continue surrendering illegal weapons to authorities in order to achieve lasting peace in the area.

This comes a few days after the Cabinet Secretary, Ministry of Interior, and Coordination of National Government, Fred Matiang'i visited the County to assess the security situation.

He re-assured communities in Marsabit County of the Government's unwavering commitment to restore peace and security.

On June 2, the imposed curfew in Marsabit was extended by 30 more days.

It followed the lapse of the earlier 30-day curfew period that was enforced on May 2.

Matiangí extended the curfew for 30 more days to enable the ongoing operations to meet their targets.

“There shall be no public gatherings, procession or movement either alone or as a group during the period of the curfew except as has been permitted in writing by the Inspector General of the National Police Service,” he said in a special gazette notice.

Some support curfew extension, while others say it is not necessary
News - Page 8
6 months ago