"We hope the sentence serves as a semblance of justice to Momanyi," DCI said.

• Minyatta ransacked Momanyi’s pockets and took his mobile phone before they both jumped on the waiting motorbike leaving Momanyi heavily shaken after the 45 seconds ordeal.

• Immediately after receiving the report, Detectives based at DCI Kilimani launched a manhunt for the thugs. 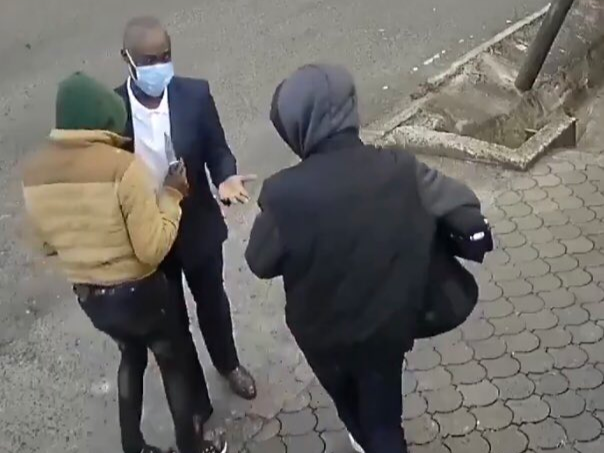 The DCI on Thursday welcomed the life sentence handed to two suspects, who were caught on camera attacking a man at gunpoint along Rose Avenue in Kilimani, on the morning of June 25, 2020.

In an incident that was captured live on CCTV cameras in adjacent buildings and shared widely on social media, Paul Sewe Momanyi was accosted outside Almond Court as he headed to work at around 7am, by two men who had leaped from a motorbike.

"One of them later identified as Humphrey Minyatta, (first accused) placed a knife on his throat as his accomplice Timothy Muzami (second accused) pointed a firearm on his forehead and snatched a bag that he was carrying," DCI accounted the incident.

Minyatta ransacked Momanyi’s pockets and took his mobile phone before they both jumped on the waiting motorbike leaving Momanyi heavily shaken after the 45 seconds ordeal.

Immediately after receiving the report, Detectives based at DCI Kilimani launched a manhunt for the thugs.

"The DCI Communication team sent out an appeal on Twitter, asking Kenyans with information regarding the suspects to volunteer it to detectives," they added.

The sleuths led by the then Kilimani crime buster Fatuma Hadi, mounted a stealth intelligence-led operation, that took them to the densely populated areas of Gatina, Kanungaka, and Kawangware.

The detectives laid an ambush for the suspects for three days and later widened their dragnet to Pangani where the two suspects were arrested after a week.

After the arrest, Minyatta took the detectives to his house where they discovered the knife that the suspect had brandished and the yellow-brown jacket.

"They also found the pair of shoes that he wore as captured in the CCTV footage on the day of the attack."

An identification parade was conducted and Momanyi positively identified the two as his attackers.

A third suspect who was also arrested led the detectives to the recovery of Momanyi’s two phones and a laptop, although he could not be directly linked to the two suspects.

Detectives based at the Forensic Imaging and Acoustics unit retrieved the CCTV footage and after subjecting it to forensic analysis, confirmed that it was authentic and had not been tampered with.

In her judgment, Senior Resident Magistrate Zainabu Abdul noted that although the firearm used by the second accused has not been recovered, it is still out there being used to commit similar atrocities on innocent Kenyans.

She added that despite the accused persons being first-time offenders, they were not remorseful for their actions after causing untold mental anguish to the victim.

Hon Zainabu added that such cases where criminals were using boda boda’s as getaway means we're on the rise, hence the need to deter such acts by pronouncing the life sentence for the duo.

The Directorate has thanked the Magistrate for handing down the sentence, in a case that has taken a short time to conclude.

"We hope the sentence serves as a semblance of justice to Momanyi," DCI said.

Mercy Mwangangi: He was beating walls around me and I called my lawyer at 3am

“He was beating walls around me. He was enraged and there was a lot of scuffling.”
News
2 months ago
WATCH: The latest videos from the Star
by SHARON MWENDE
News
09 June 2022 - 22:24