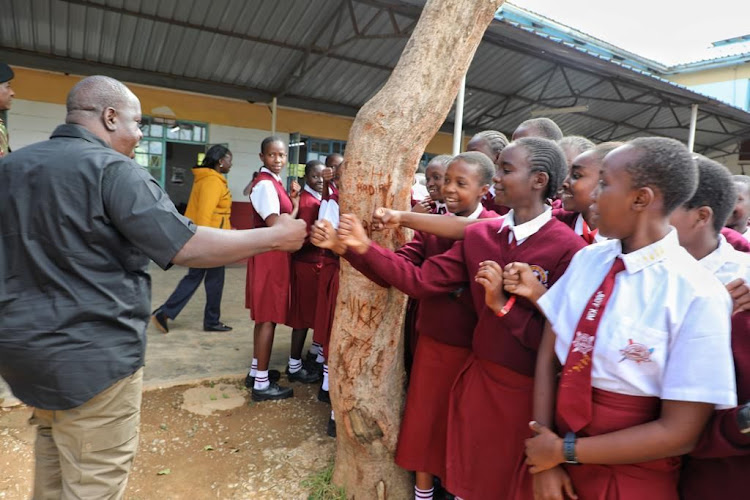 Interior Cabinet Secretary Fred Matiang’i visited the families of three children killed in a bandit attack in Tot, Elgeyo Marakwet County on Wednesday and directed that the security teams in Kerio Valley be overhauled to end frequent attacks.

The CS who was in Tot and Kapsowar to assess the ongoing operation to flush out bandits in the Kerio valley said intelligence reports had implicated security officers in the frequent attacks experienced in Elgeyo Marakwet, Baringo and West Pokot counties.

He said there was evidence that police officers and chiefs in the counties repeatedly failed to act on the information shared by credible sources or in other cases, actively abetted cattle rustling and banditry in the larger North Rift region.

Matiang’i who was accompanied by the Inspector General of Police Hilary Mutyambai, Rift Valley Regional Commissioner Maalim Mohammed and other security chiefs said the shooting of school buses and the killing of children in Marakwet defied traditional fighting tenets.

He reinforced evidence that the conflict had little to do with cultural feuds.

“I have met with the mothers and family members of the children who were killed weeks ago. There is nothing more heart-wrenching than going through the experience. What do you tell a mother who has lost a child in such a manner,” the CS said.

He said a review of the current deployment following the declaration last week of a 30-day curfew in Elgeyo Marakwet County will also be undertaken and the command of the operation placed under high-ranking security officers.

“We have agreed to undertake the replacement of the security team leaders and the reorganization of our structure. We have tried all manner of things to resolve this problem before and we are determined to get it right this time,” the CS said.

The curfew will be imposed alongside a disarmament operation targeting illegal guns blamed for perpetuating deadly and cyclic violence that has claimed many lives over the years.

The CS who also held a meeting with chiefs and their assistants directed an immediate assessment of the competence and suitability of the entire team saying many of them were compromised by political and ethnic affiliations.

At another meeting with community elders, the CS said although the number of security incidents reported in the area has dropped significantly since the operation was launched, the curfew hours will not be reviewed until after three weeks.

The government hopes a sizeable number of guns will have been surrendered by then.