The Mitumba Consortium also wants audience with DP Ruto over his plans to end mitumba importation.

• The group said it was highly unlikely that undermining the second-hand clothing industry would revive the local textile industry.

• Chairperson Teresia Wairimu said attempts to shut down the mitumba industry in Kenya is based on unfounded grounds. 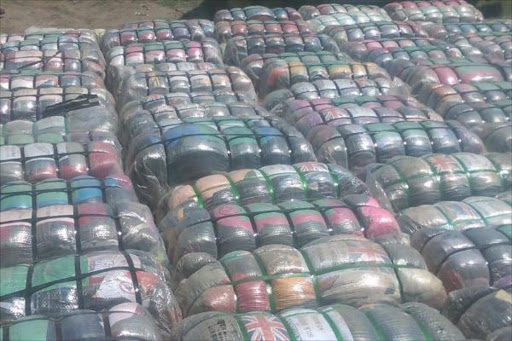 The Mitumba Consortium Association (MCA) also wants audience with DP William Ruto over his previous sentiments insinuating that he will bring to an end importation of second hand clothes under his his presidency.

Ruto has however in the past few days insisted that he supports the mitumba industry which should coexist with the local textile industry.

Raila has also clarified that it is not his intention to ban the Mitumba importation.

Raila said he will protect the traders by ensuring that they get the first opportunity to market locally made clothes.

His statement followed a sustained backlash from his opponents in Deputy President William Ruto’s camp over the comments he made during the launch of his manifesto, which champions revival of the local textile industry.

In its earlier statement, the Mitumba Consortium Association  demanded clarity on the Mitumba business issue from both Ruto and Raila

Led by chairperson Teresia Wairimu, the group said it was highly unlikely that undermining the second-hand clothing industry would revive the local textile industry.

"To kill the mitumba trade and promote textile is to give with one hand and take away with the other. We regret that the former PM and the Deputy President have relied on false information about second hand clothes," Wairimu said.

"We therefore seek audience with the two main presidential candidates to fashion them with correct information," she added.

Wairimu said attempts to shut down the mitumba industry in Kenya is based on unfounded grounds.

In 2019, she claimed, mitumba trade paid in excess of Sh15 billion in taxes and excise duty to the exchequer.

"Africa requires a more effective regulation of supply chains for second-hand clothing, which would include an expansion of sorting centres at key strategic trading hubs like Kenya."

She said estimates indicate that each facility will directly create up to 500 jobs with further employment in related sectors.

"If all second-hand clothes were sorted in Kenya rather than abroad, Kenya would gain up to 14,000 additional jobs."

"Kenya should therefore bank on this high population and build a cluster of textile producers who together with second-hand clothing operators, would create capacity for long-term innovation and growth,"Wairimu said.

Do you wear mitumba?

Do you wear mitumba?
Poll of the day
3 months ago