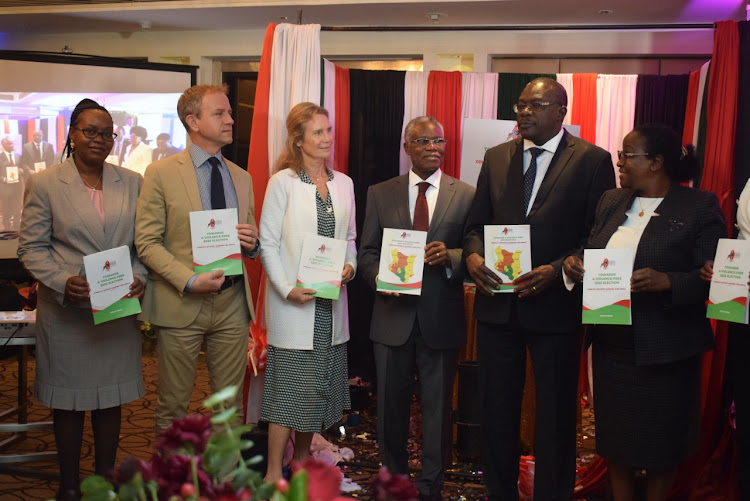 The government has vowed to deal firmly with electoral violence, even as the National Cohesion and Integration Commission named six hotspot areas.

Agencies involved in the handling of elections have assured Kenyans of peaceful elections and pledged to deploy sufficient resources and manpower to avert violence in the six counties.

A report by the NCIC said Nairobi, Nakuru, Kericho, Kisumu, Uasin Gishu and Mombasa are highly likely to experience electoral violence during the 2022 General Election.

While launching the report in Nairobi on Tuesday, NCIC chairman Samuel Kobia said key players in the electoral processes must make timely and decisive actions on poll malpractices to avert violence.

“If a chain is as strong as its weakest link, then Kenya is only as strong as its electoral years. Every five years we are treated to heightened tensions, threats of violence, hate speech and political vitriol that threaten to throw us into violence,” he said.

He appealed to the public to embrace full participation in the electoral process, while observing the rule of law.

He said Kenyans must resist manipulation, desist from engaging in hate speech and propaganda and embrace alternative dispute resolution mechanisms, in the face of conflicts and electoral disagreements.

“Going to the streets should not be an option when we feel aggrieved. This is the message that we must send out there,” Kobia added.

Ministry of Interior, the Office of Registrar of Political Parties, the Ethics and Anti-Corruption Commission, the National Gender and Equality Commission assured they would implement recommendations of the report to the letter.

Findings showed Kenyans have low trust in some of the key institutions charged with elections management.

The IEBC was rated at 26 per cent, Judiciary 23 per cent and National Police Service at 19 per cent.

“All the three institutions didn't attain the average of 50 per cent thus demonstrating low trust,” the study said.

“We have been given the recommendations, lets now act on them. The elderly do not want to participate in elections for fear of violence, yet the majority of them are registered voters. Women fear harassment and tend to run away,” Mutinda said.

Dominic Kisavi, commissioner of police in charge of operations, said the National Police Service has already trained all county commanders on election management.

“We want to assure Kenyans that they will vote without fear,” he said.

The Registrar of Political Parties Ann Nderitu said parties should openly condemn violence and strive to contain their supports in times of disagreements.

“We have 350 monitors across the country. We will deploy more of them in the six counties identified as hotspots,” she said.

Nderitu further said her office will have peace caravans in the six counties from the second week of June.

The study made several recommendations towards different stakeholders.

It called on the IEBC and the Judiciary to exercise independence and remain non-partisan in executing their mandate.

It asked the ORPP to monitor the conduct of the politicians and ensure strict enforcement of the electoral code of conduct and appealed on the police to minimise use of excessive force and intimidation during the electioneering period and respond promptly to emerging security threats.

The NCIC pledged to conduct regular and continuous nationwide civic education on cohesion and peaceful coexistence.

The report said there is an ongoing emergence and re-emergence of organised criminal gangs, especially juvenile groups, gangs, goons and militia.

It further said the use of drugs and substance abuse is rampant and could be a catalyst for electoral violence.

It also pointed out that there is a rise in the use of hate speech, propaganda and political rhetoric in public spaces and social media platforms- a key trigger of electoral violence.

The study posted a national Election Violence Index, of 53.4 per cent.

It said the country has a weak legal framework for enforcing Chapter 6 of the constitution, especially in the area of vetting candidate.

“This challenge is posed by the inadequate mechanisms for barring candidates who do not meet the vetting threshold envisaged in the Chapter,” it said.

The country also suffers from a proliferation of unethical leaders who are driven by greed for material wealth.

"It is a shame that many people today have an unnecessary need to accumulate illicit wealth that results in negative impacts such as corruption, economic violence, and a surge of unethical conduct,” it added.