Kalonzo urged the Kamba community to bear with him and support his political move.

•Kalonzo urged the Kamba community to bear with him and support his political move stating that it was in their best interest. 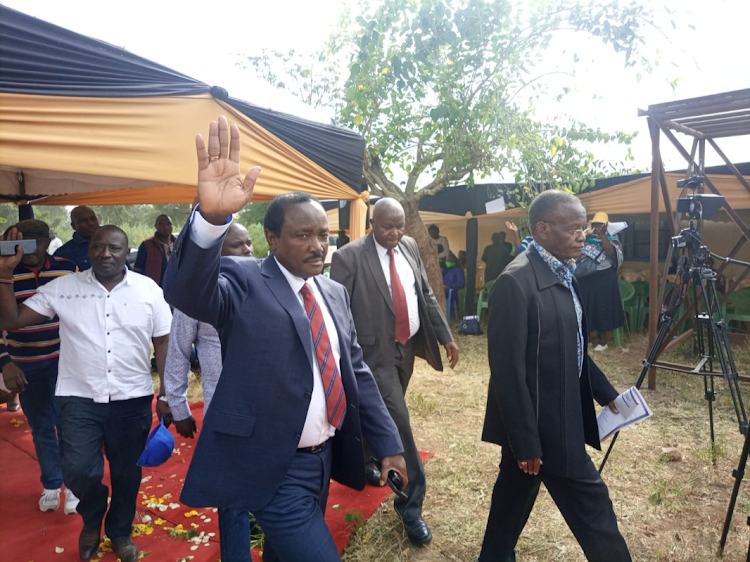 Wiper leader Kalonzo Musyoka has said he will make a major announcement that will disrupt the political setting of the country in two days' time.

Speaking on Wednesday at the burial of former diplomat Joseph Katithi in Kyawango village in Mwala, Machakos county, Kalonzo yet again gave a hint that he could be on his way back to Azimio La Umoja  One Kenya Alliance.

Kalonzo's move to pass messages of condolences from ODM Chief and Azimio presidential candidate Raila Odinga and his running mate Martha Karua to the bereaved family exposed his apparent plan to rejoin the Azimio coalition.

While revealing his looming major announcement, the Wiper leader urged the Kamba community to bear with him and support his political move stating that it was in their best interest.

"I will give a political statement within two days’ time. That’s why I am requesting the Kamba community to support my political move,” Kalonzo said.

He asked the region's leaders not to ridicule him once he makes the announcement since he has the blessings of the Wiper party’s delegates.

Wiper delegates last week urged Kalonzo to rejoin Azimio and renegotiate on behalf of the community what is at stake for them as a region.

“I was given authority by Wiper delegates to contest for the Presidency. It isn’t only Wiper and Kamba community, but we need all communities for Kenya to move on as a nation,” Kalonzo said.

Kalonzo, however, maintained that he was shortchanged in the coalition agreement which his Wiper party signed to form the Azimio coalition alongside other political parties.

“We had earlier gotten into a coalition that brought in several political parties that included President Uhuru’s Jubilee, Raila’s ODM, and Wiper. I was shortchanged."

Kalonzo spoke a day after he was criticized by Machakos Governor Alfred Mutua who said he will return to Azimio alone.

He reiterated that as a community, they were being ridiculed wherever they go because of Kalonzo’s indecisive political stand.

“Everywhere we go we are told that Kambas don’t have a stand. Kalonzo, the Kamba leader said he won’t work with Raila but he said Raila ‘tosha’. He said he won’t attend the interview but he attended but still denied Raila’s running mate post,” Mutua said.

The Maendeleo Chap Chap party leader spoke during a meeting that brought together MCC aspirants from different parts of the country at his office in Machakos on Tuesday, May 31.

“Kambas are saying if you go back to Azimio, you are going alone. Kambas will decide where they are going themselves,” Mutua said.

He said as a community, they want to be in the next government.

Mutua says Kambas are being ridiculed because of  Kalonzo's political indecisiveness.
News
8 months ago

Should Kalonzo Musyoka rejoin Azimio La Umoja?
Poll of the day
8 months ago