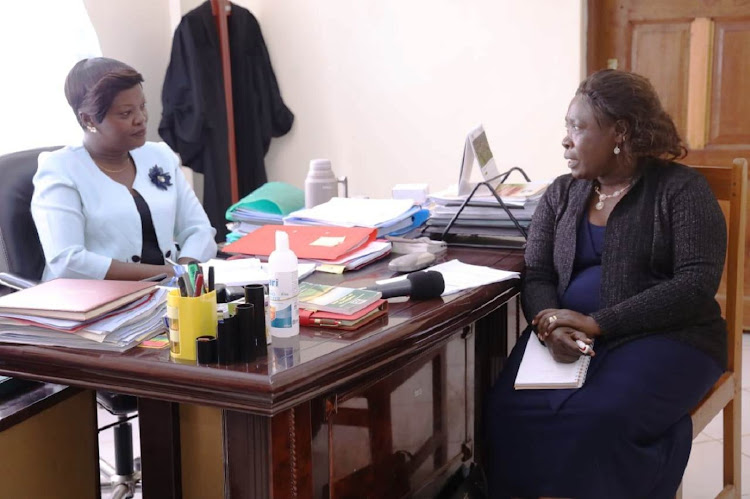 RISE IN CASES: County attorney Vivian Mmbaka confers with Kakamega first lady Priscila Oparanya in her office during a meeting with organisations fighting for rights of victims of Sexual and Gender Based violence on Monday, May 31.
Image: HILTON OTENYO

County attorney Vivian Mmbaka said the Kakamega government is committed to the fight against GBV and teenage pregnancies, which have been on the rise.

She said the county has enacted the Kakamega County HIV, AIDS and STI Management Act, 2020 and put in place the HIV, AIDS and STI and Sexual and Gender Based Violence policies to steady the war against the menace.

Mmbaka spoke in her office when she met anti-SGBV crusaders who paid her a courtesy call on Monday.

“We are going to intensify the fight against SGBV and teen pregnancies. The first step being the preparation of an MoU with relevant partners,” Mmbaka said.

The attorney said her department will carry out legal aid clinics on gender based issues and offer pro bono legal support to victims.

Kakamega GBV coordinator Rose Muhanda said the county is experiencing high numbers of SGBV and teen pregnancies, which need concerted efforts by all players to stem the menace.

“There is urgent need for the office of the county attorney to come to the rescue of these vulnerable groups. Many who want to pursue the cases in courts have been curtailed by the huge legal fees demanded by lawyers,” she said.

Muhanda said the act and policies prepared by the office of the attorney had come in handy in the fight against SGBV and teenage pregnancies.

She said the county is currently ranked in position 18, from five in 2020, adding that a lot more needs to be done.

Second one in Kenya; 78% of 2017 poll victims did not report to the police.
Counties
2 months ago

More than 400 of them have already been trained by different human rights organisations.
Elections 2022
2 months ago

NPS says the government will continue to reform and streamline the sector.
News
4 months ago

Kenya doing better on GBV than neighbours, cases still on the rise

The country has committed approximately Sh202 million to end cases by 2026.
News
8 months ago
“WATCH: The latest videos from the Star”
by HILTON OTENYO Correspondent, Western Region
News
31 May 2022 - 23:00