Why cassava could be a way to keep food costs down

Cassava is, at best, everyday food and used to be the regular fare of the poor and servants.

•Cassava is available all year round, it is cheap and is known, or to put it correctly, was known as food for the poor.

•The other popular one is yam, which Nigerian author Chinua Achebe famously described as "the king of crops". 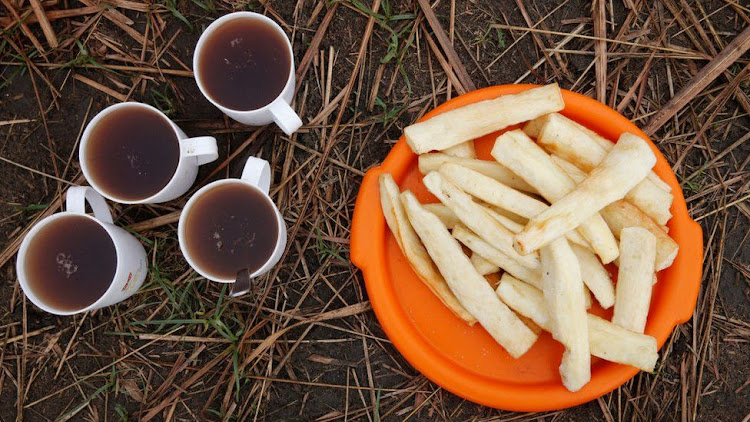 Cassava can be eaten as a snack./BBC

In our series of letters from African journalists, Ghanaian Elizabeth Ohene considers the call of Uganda's President Yoweri Museveni for people to eat the humble cassava as the price of wheat soars around the world.

There are two main root vegetables in West Africa - cassava and yam.

Cassava is available all year round, it is cheap and is known, or to put it correctly, was known as food for the poor.

The other popular one is yam, which Nigerian author Chinua Achebe famously described as "the king of crops".

The yam harvest is awaited eagerly. Indeed, special rites are performed before the new yam can be eaten, and we put on our finest clothes to celebrate the vegetable.

Cassava is, at best, everyday food and used to be the regular fare of the poor and servants.

I note that President Yoweri Museveni of Uganda is urging his people to turn to a diet of cassava as an antidote to the rocketing price of wheat during the current worldwide cost of living crisis.

"If there is no bread, eat muwogo [cassava]," he said.

Mr Museveni's comments have caused controversy, with critics saying he has no real plan to deal with the cost of living crisis.

Over here in Ghana, we had a finance minister who, way back in the 1960s, tried to justify a proposed increase in taxes by saying the poor wouldn't be affected because they ate gari - a popular granular flour made from processed cassava.

At the time, gari was known largely as food for the poor and the minister made the point that if you added water to half a cup of gari, it would swell to provide enough food for three people. It was cheap and filling.

The minister was also making the point, without saying it aloud, that poor people didn't eat bread or rice, or other such fancy imported foods. This was largely true at the time.

Years later, we had a minister of state who addressed rising food prices by saying people could always eat kokonte, which he cited as a cheap alternative to rice and other imported foods.

Kokonte is made from cassava flour and, like all things cassava, was known as food eaten by the poor.

President Museveni made the point that he ate cassava. In other words, nobody should be ashamed of eating, or seen to be eating, cassava since it was now presidential food.

These days, the drought-resistant crop is also touted as having health benefits - cassava root is gluten-free, high in vitamin C and rich in copper.

I don't know if cassava remains branded as food for the poor in Uganda, but in Ghana, we have come a long way.

Take gari. It shed its image as food for servants and the poor when it became the indispensable companion of all boarding school students.

They go to school with a bag of gari in their "chop box". The various meals they make with gari in dormitories are called soakings.

It's a quick and easy process, requires no cooking or microwave oven for heating - you put some gari in a cup, add water, sugar and milk, mix it and that's it. You have the most delicious and filling snack.

The savoury alternative is more popular and involves taking about a cup of dry gari, sprinkling a bit of water on it to soften it, adding a tablespoonful of our famous peppery sauce, shito, adding a tin of sardines, mixing it all up - and hey presto, you have another delicious meal. I don't know why but this one seems best eaten in a group.

But gari really became the ultimate haute-cuisine item when Ghana's legendary caterer, Barbara Baeta, devised a recipe for "gari foto" - gari mixed with gravy and seafood, which she served at a state banquet in 1970 hosted by Prime Minister Kofi Abrefa Busia.

Suddenly gari had become food that was served at gatherings for the high and mighty and it was fashionable.