However, these campaigns have been going on despite the timelines issued by the IEBC.

•According to the electoral commission, the campaigns are to kick off officially on May 29. 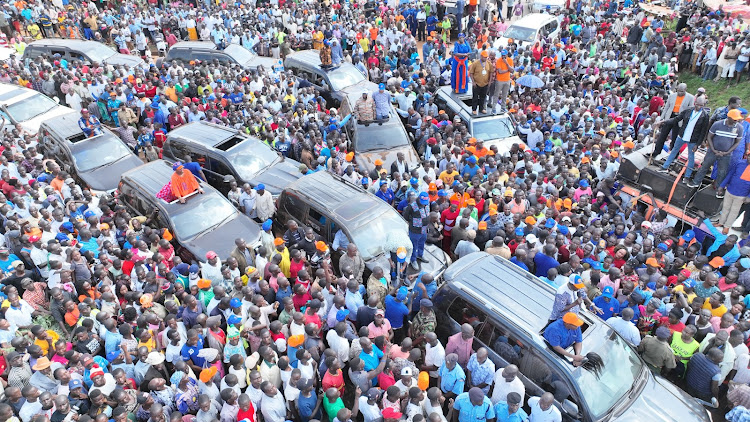 Kenya's official campaign period begins today ahead of General elections to be held on August 9.

Politicians are expected to sell their agenda as they woo voters for their respective seats.

However, these campaigns have been going on despite the timelines issued by the IEBC.

Raila has been selling his Azimio la Umoja message to voters as he promises to make the economy bigger and better.

On the other hand, Ruto is selling his Hustler agenda that seeks to address the Bottom up economic model.

According to the IEBC shortlist, the President Uhuru Kenyatta succession race that began with 56 contenders reduced to 16.

According to the electoral commission, the campaigns are to kick off officially on May 29 in their key dates in the run-up to August’s General Election.

Key among them is the registration of aspirants seeking the different seats which include; presidential, senatorial and parliamentary positions.  This is expected to be completed by May 29th.

Chairman Wafula Chebukati also announced that governorship aspirants and their county woman representative counterparts will be registered on June 1.

Two days ago, the electoral commission ordered a crackdown on state officers using public resources in their campaign for various seats in the August 9 race.

The Independent Electoral and Boundaries Commission ordered its officials and appointed agents to impound or order the impounding of any state resources used in the campaign unlawfully.

The directive would apply to sitting Members of Parliament— Senators, National Assembly members and Woman Representatives— as well as governors, deputy governors, and members of county assembly.

“A member of the commission, any person designated by the commission or any authorised agency shall have the power to impound or order the impounding of any state resources that are unlawfully used in an election campaign,” IEBC chairman Wafula Chebukati said in a notice to the affected state officers.

The commission wants the officers to state the facilities attached to them or equipment that is normally in their custody by virtue of the office they hold.

Raila brings on board experienced and seasoned regional bigwigs to lead rev up his vote hunt.
News
4 months ago

The president's aggressive succession plan marred by blunders and miscalculations.
Siasa
4 months ago

Why Uhuru is Ruto’s August headache

Why Uhuru's impact on Raila campaigns is bigger outside Central