Ruto said part of the agreement he signed with political parties from the coast is to revive the crops.

• The DP said he has entered into agreement with the region's leadership to revive cashew nut, coconut and bixa cash crops which he said had been neglected by previous regimes.

• He revealed that part of the agreement he signed with political parties from the coast is to revive the three crops. 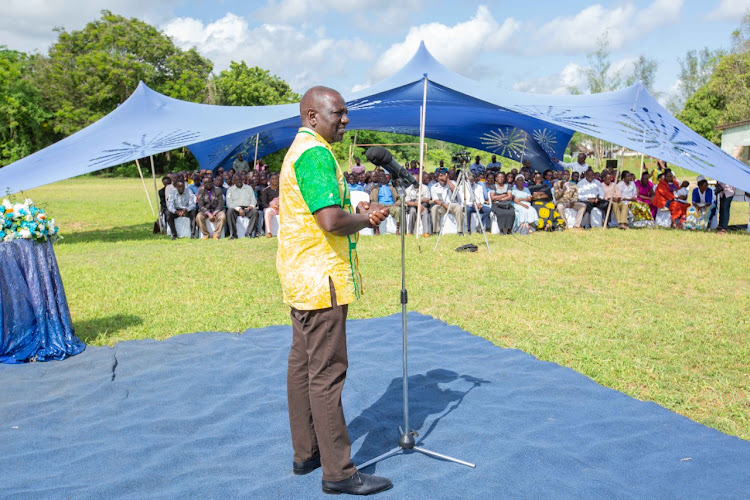 Kenya Kwanza presidential candidate William Ruto has pledged to revive the cash crop sector at the coast if elected president.

The DP said he has entered into agreement with the region's leadership to revive cashew nut, coconut and bixa cash crops which he said had been neglected by previous regimes.

He revealed that part of the agreement he signed with political parties from the Coast is to revive trade in the three crops.

"I am told after the collapse of the Kenya cashew nut factory, squatters invaded the 350 acres of land for the factory. We will use government money to buy 500 acres in a different place to set up a new factory with modern machinery to enhance value addition to cashew nut," Ruto said.

He spoke on Friday at Karisa Maitha Grounds during the Kenya Kwanza Economic forum.

The Deputy President also said he will make sure a guaranteed minimum return for the cashew nut is adopted.

Kilifi governor Amason Kingi said quite a good number of people died without being paid their dues by the factory management.

He called on the DP to make sure they are compensated before he embarks on any other issue.

"We have people who died before they were paid for the cashew nuts they supplied while others worked there and they were not paid.

"We have people here who if they narrate to you the pains of the collapse of the cashew nut factory, you will shed tears. Lets wipe their tears even in their graves," Kingi said.

"There is a small cashew processing factory at the Ten senses farm in Kibarani but we need a bigger one. This will make the economy of this region grow tremendously," he said.

Kilifi North MP, Owen Baya, successively moved a motion in parliament to amend the Crops Act to include coconut and cashew nut crops as cash crops to attract funding from the government.

He called on the government to establish an insurance cover to cover loses in the event coconut trees are affected by drought.

The MP said his efforts to compel the government to establish the insurance cover have been unsuccessful.

"I was taken in circles but livestock farmers were given the insurance for their animals. I request you to tell us if you will be elected president will you give insurance to our crops or not?" Baya posed.

Ruto said as part of the charter he will sign with the coast people, he will ensure if a crop does not meet the guaranteed return, the government will compensate them.