Lt Gen Muhoozi Kainerugaba put out a tweet saying he had resigned; the army later said he had not.

• The tweet announced Muhoozi’s retirement from the Ugandan People’s Defence Forces (UPDF), which he had formally served in since 1999.

• While Muhoozi clarified hours later that his retirement would not come for eight years, the post fits a recent pattern that has fuelled growing public perception that he is declaring his political intentions. 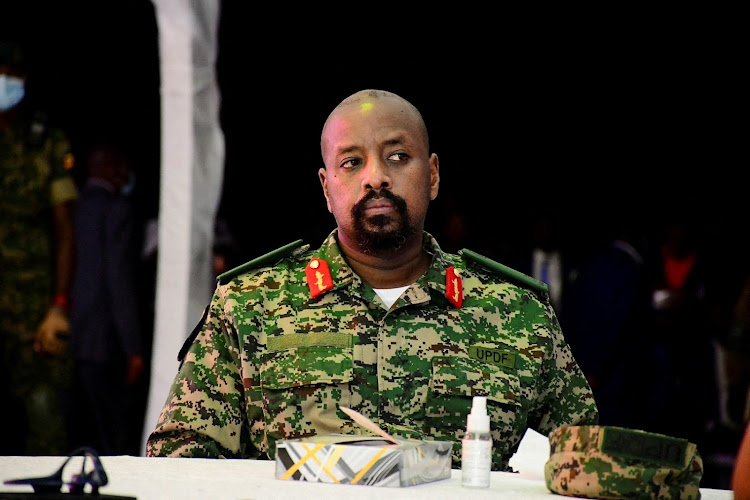 Lt. General Muhoozi Kainerugaba, the son of Uganda's President Yoweri Museveni, who leads the Ugandan army's land forces, looks on during his birthday party in Entebbe, Uganda May 7, 2022.
Image: REUTERS

On 8 March 2022, Ugandan politics was sent into a spin by 49 words tweeted by President Yoweri Museveni’s only son, Lt Gen Muhoozi Kainerugaba.

The tweet announced Muhoozi’s retirement from the Ugandan People’s Defence Forces (UPDF), which he had formally served in since 1999. Since his most recent promotion in June 2021, he has served as the commander of the land forces. The position made him the third-highest ranking officer in the defence forces.

After 28 years of service in my glorious military, the greatest military in the world, I am happy to announce my retirement. Me and my soldiers have achieved so much! I have only love and respect for all those great men and women that achieve greatness for Uganda everyday.

Muhoozi’s resignation would clear his legal path to formally enter electoral politics. Serving members of the armed forces are banned from political activity under Uganda’s constitution.

The tweet seemed to catch everyone by surprise, including senior security officials. They later put out a statement saying Muhoozi had not resigned.

Get news that’s free, independent and based on evidence.

While Muhoozi clarified hours later that his retirement would not come for eight years, the post fits a recent pattern that has fuelled growing public perception that he is declaring his political intentions.

The real news about @mkainerugaba retirement from @UPDFspokespersn is right here! pic.twitter.com/VWKaV1BSmb

The most stark example of this occurred weeks after the tweet. This was in the form of a nationwide series of public events to mark Muhoozi’s 48th birthday.

These included sports tournaments, public rallies, a party for supporters, and a state dinner. Public roads were shut for the events, and state-owned broadcasters aired some of them live. Rwandan President Paul Kagame attended the State Dinner.

At one of the birthday rallies held in the south-western town of Masaka on April 20, supporters wore T-shirts with slogans such as ‘Muhoozi K is our next president’ and ‘MK Project. Team Chairman. Secure Your Tomorrow.’

In subsequent tweets in early May, Muhoozi dropped any remaining reticence.

I consider President @KagutaMuseveni ,and President @PaulKagame the best strategists that ever lived! When Team MK wins power in this country, which we will! Our first act will be to increase the Sports budget! pic.twitter.com/DvERkh5dOz

The enemies fought us for so long! They abused me with every name they could find! Now they can't believe we have taken over the country! We will not stop until we are in complete control! pic.twitter.com/i1sRbZDNqN

At the state dinner, Museveni, who has always denied grooming his son to succeed him, made comments  implying that Muhoozi would soon be in charge.

Whether or not Muhoozi makes it to State House – and a great deal still stands in the way of this happening – it is undoubtedly clear that the possibility of replacing Museveni with his son has dramatically shifted from rumour to reality in recent months.

Muhoozi was 11 years old when his father’s National Resistance Army took Uganda’s capital Kampala in 1986. In 1999, he formally joined the Ugandan defence forces while a student at the city’s Makerere University.

He has been subsequently trained at elite military academies in the UK and US, and continually promoted ahead of more experienced peers.

After Muhoozi’s most recent promotion to commander of the land forces, he has featured in a number of Uganda’s military deployments. These include those in the Democratic Republic of Congo, Somalia where Uganda is part of the African Union peacekeeping force, and the Karamoja region in Uganda’s northeast.

Muhoozi’s fast-tracked rise into a position of power within the military has long produced accusations that he is being groomed by Museveni for succession. Yet, despite this ‘heir apparent’ accusation, Muhoozi’s public profile had previously remained relatively small. He is still perceived as something of ‘an unknown quantity’ among broad swathes of the Ugandan public.

He has rarely given interviews to traditional media outlets. For most of his adult life, the average citizen would probably not have known very much about him.

The reasons for this relatively subdued profile were related to the inner workings of the National Resistance Movement (NRM) regime that Museveni has led since 1986.

At every point in his now 36 years at the helm, the president has maintained a posture of impending retirement. Museveni consistently suggests that the next election will be his last and that he dreams of the simple life of cattle keeping.

Being constantly about to step down in this way has allowed Museveni to play off the factions of the NRM against each other. He has dangled the possibility of succession before them.

In Uganda, this ploy has been referred to as the succession ‘queue’ within the ruling party.

In recent years, however, this act has worn thin.

The decline of these figures – all rumoured to be in the metaphorical ‘queue’ for the top job – has made even the most naive party elites incredulous to the idea that Museveni will ever hand over power to one of them.

This change has coincided with the political emergence of Muhoozi in recent years.

His public profile has been growing both domestically and internationally. As a presidential advisor on special operations, a post he was appointed to in 2017 alongside his military roles, Muhoozi has held summits with the leaders of Egypt, Kenya and Somalia.

He has also held regional engagements with Rwanda’s Kagame, whom he refers to as his ‘uncle’. Following a meeting between the two men in Kigali in January, Rwanda finally agreed to reopen its border with Uganda. It had been closed for three years following Kigali’s accusations that Uganda had been harbouring members of the opposition Rwandan National Congress.

The perception that Muhoozi’s intervention has been key in mending the frosty relationship between the two countries was reinforced by a further meeting, again in Kigali, in March. After this, Muhoozi and Kagame announced a broader bi-lateral agreement to stop supporting dissidents in each other’s countries.

Shortly afterwards, Rwandan opposition blogger, and former journalist, Robert Mukombozi, who had been living in Kampala, was pictured boarding a plane at Uganda’s Entebbe International Airport.

Muhoozi confirmed on Twitter that Mukombozi had been expelled, describing him as an “enemy of Rwanda and Uganda”. It was not clear where Mukombozi was going, although it was possibly to Australia, with which he has ties.

No longer a quiet figure in the background, the First Son has recently become vocal on social media about many aspects of Ugandan politics and its foreign affairs.

In many cases, his stances appear to have contradicted some of the official positions of the Ugandan government. These include his tweets in support of Tigrayan rebels in Ethiopia’s civil war, and Russian President Vladimir Putin in his invasion of Ukraine.

Alarming to many is not just the positions Muhoozi has taken, but the bombastic and egotistic tone of his discourse.

He frequently states that he will destroy Uganda’s enemies, and likens himself to military and revolutionary figures throughout history. These are discursive traits that have long been components of his father’s rhetoric.

Yet, across the country and online, multiple ‘Team MK’ or ‘MK 2026’ groups are popping up to support his future presidential run.

The most likely explanation for Muhoozi’s recent emergence is that his once low profile is being raised to position him to succeed his father. If this is indeed the regime’s wish, it would be unwise to bet against it.

However, the pathway for Muhoozi to reach State House is far from guaranteed. The Ugandan public would expect him to win an election to legitimise his leadership, and in so doing he would potentially face 2021 candidate Bobi Wine in fierce competition for the nation’s increasingly young electorate.

Sam Wilkins is a Lecturer at RMIT University while Richard Vokes is Associate Professor of Anthropology, The University of Western Australia.

The article has been sourced from The Conversation.

Gen Kainerugaba posted on Twitter that he had retired from the army.
News
6 months ago