The officer told court that they needed 14 days to enable them complete investigations.

•Gachoki has since claimed he is innocent and only met Muvota twice, once in Meru and in Nairobi.

•He surrendered to the Directorate of Criminal Investigations headquarters on Monday accompanied by a lawyer. 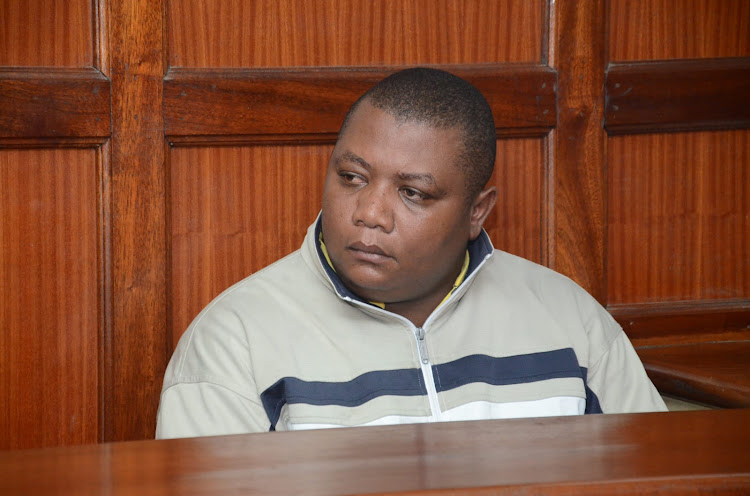 A man accused of killing Samuel Mugoh Muvota in Mirema, Nairobi, has been detained for 14 days pending investigations.

In a miscellaneous application filed in court, investigating officer Kapario Lekakeny claimed that Dennis Karani Gachoki was the driver of the vehicle that was ferrying the suspected killers.

The officer told the court that the prosecution needed 14 days to enable them to complete the investigations.

"I implore the court to take notice of the clip going viral on social media where one man was captured by CCTV footage. For clearance of doubt, the crime was committed by more than two people. The person who committed the murder fled to the car that was parked by," the court was told.

Karani is suspected to be behind the wheel and he is said to be in possession of a firearm.

"We need to travel to Mombasa, Nakuru and Kiambu where it is believed the suspect has houses and the firearm," Lekakeny said.

The suspect told the court that he had no objection to the investigations and said he was ready to comply with the detectives.

Gachoki has since claimed he is innocent and only met Muvota twice, once in Meru and in Nairobi.

He surrendered to the Directorate of Criminal Investigations headquarters on Monday accompanied by a lawyer.

The case will be mentioned on June 8.

Man accused of killing Muvota surrenders to DCI, says he is innocent

“I am innocent and I will prove this. I didn’t kill the man they say I killed,” Gachoki said.
News
1 month ago

Denis Karani Gachoki is said to be armed and dangerous.
News
1 month ago
WATCH: The latest videos from the Star
by CAROLYNE KUBWA Court Reporter
News
24 May 2022 - 12:43