Mudavadi also lashed out at Uhuru for being selective in fighting corruption.

•The duo said Kenya Kwanza had fanatical support across the country and Odinga can not measure up to them.

•Mudavadi also lashed out at Uhuru for being selective in fighting corruption. 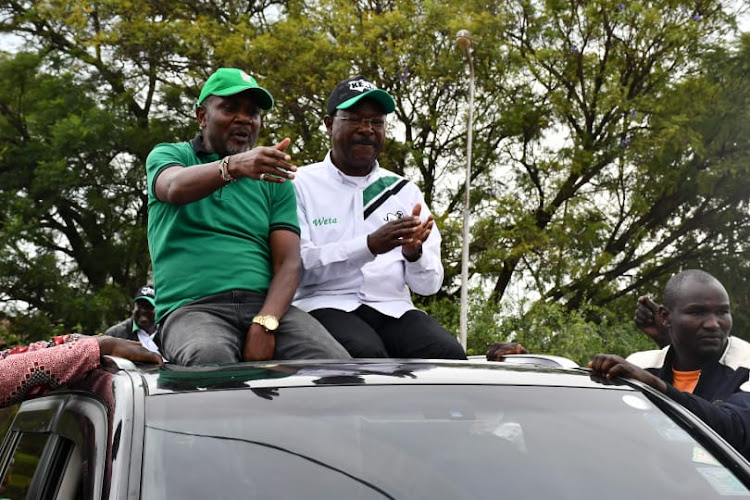 Kenya Kwanza leaders Musalia Mudavadi and his counterpart Moses Wetang'ula have hit out at president Uhuru Kenyatta saying he will be shocked by the results of the August 9, elections.

Speaking in Cheptais, the duo said Kenya Kwanza had fanatical support across the country and Odinga can not measure up to them.

Mudavadi also lashed out at Uhuru for being selective in fighting corruption.

"As he signs a deal to have that money repatriated from Switzerland to Kenya, let him also ensure that money in offshore accounts associated with his family is returned," said Musalia.

He said if the money is brought back to the country, it will boost the economy and create many job opportunities.

Musalia said Uhuru has been biased in the implementation of his development saying the president had confessed during the Sagana meeting that half of the roads done during his tenure were in Central Kenya.

"If Odinga is saying he is coming to follow the footsteps of Uhuru it means he will only concentrate development in his region which is not good for the country," said Musalia.

He said that now that the chief justice had gazetted a notice telling Kenyans not to comment on anything during the presidential petition, Kenyans should ensure that Kenya Kwanza wins in the first round.

Bungoma senator Moses Wetang'ula accused Uhuru of ruining the country's economy saying the prices of essential commodities have gone up.

"This election will be about the side that is ready to reduce the prices of essential commodities and improve the economy," said Wetang'ula.

The senator said to improve the economy of the Mt.Elgon region, the Kenya Kwanza government will ensure the construction of two tea factories in the region.

"Our main aim is to change the lives of the common citizens who are reeling in abject poverty and mountains of debts," said Wetang'ula.

"We will ensure that we give government funded loans with minimal interest to all low-income earners."

Senate speaker Kenneth Lusaka urged residents to vote for deputy president William Ruto saying it is only through the Kenya Kwanza alliance that the interest of the region will be catered for.

He described Ruto as a hardworking person who will steer the economy of the country.

State to launch new chancery in Swiss capital of Bern

Mudavadi said the Western region is ready to deliver massive votes to the DP.
News
2 months ago
WATCH: The latest videos from the Star
by JOHN NALIANYA Reporter
News
24 May 2022 - 20:19