Kibicho said the church had a moral duty to help in the election of credible leaders.

•Kibicho said the church had a moral duty to help in the election of credible leaders.

•The PS who was responding to appeals by the religious leaders for the church to be more involved in civic education said the clergy was well placed to educate voters on why some candidates were unsuitable for public office. 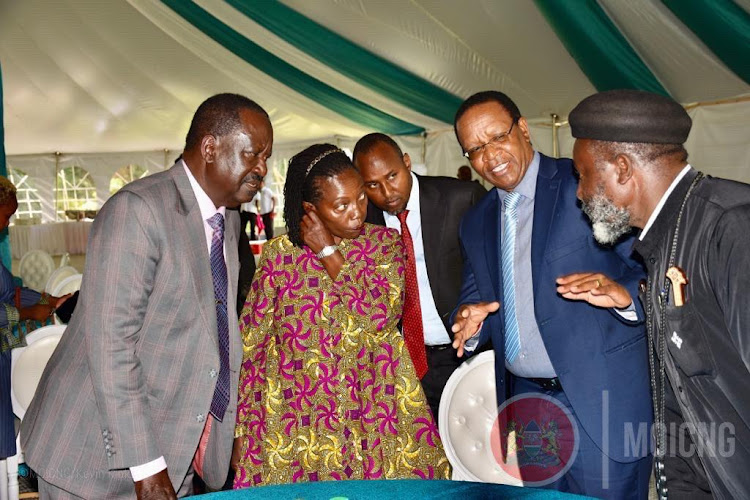 Interior Principal Secretary Dr Karanja Kibicho has challenged religious leaders not to shy away from declaring and supporting their preferred political candidates.

Kibicho said the church had a moral duty to help in the election of credible leaders.

The PS who was responding to appeals by the religious leaders for the church to be more involved in civic education said the clergy was well placed to educate voters on why some candidates were unsuitable for public office.

“You should lead by example and tell your people which candidate is good for them. You interact with these politicians, and you know well the doers and the talkers who offer lip service during the day and do bad things at night. You should not be afraid to pitch for political leaders of integrity who have the credentials consistent with their history and track record,” he said.

He spoke Monday when he addressed leaders drawn from non-mainstream churches under the Organization of African Independent Churches (OAIC) at a meeting that was also addressed by the Azimio Presidential candidate Raila Odinga and his running mate, Martha Karua.

The PS defended himself from accusations of involvement in partisan politics saying he had a Constitutional right to political association and to free speech.

The church leaders promised to promote dialogue as a solution to divisive politics and invited other aspirants to use religious forums in spreading peace before, during and after the August 9 polls.

Odinga pledged to partner with the church to promote issue-based politics and ideologies that he said will foster peaceful coexistence, inclusive socio-economic growth, and good governance.

Odinga took the opportunity to drum up support for his presidential race saying he was committed to free speech, religious freedoms and equal opportunities.

“Every child born has the right to equal opportunity – from childhood to adulthood – to secure meaningful employment so that they can upgrade their social status. We want to create a system where the youth and women can access loans from a pool giving a period of seven years for repayment.”

Karua urged the leaders to resist negative influence by political leaders only interested in their votes and urged independent churches to grant audience to candidates selling agendas and not insults and seeds of negative ethnicity.

Besides involvement in civic education, the clergy also appealed to the government to restore the churches’ management of schools associated with it that are currently under the Ministry of Education.

They also urged the government to intervene and allow learners of Akorino faith and other sects to dress in attires consistent with their faith instead of strict school uniforms.

They also want the government to help fast-track the issuance of title deeds for land held by churches and to help it acquire land to build churches in urban centres.

They also asked to be more involved in national events including the offering of prayers.

Dr Kibicho said the government was willing to support the church undertake civic engagement through outreach programs across the country.

Ruto said the church can no longer afford to be neutral ahead of  the August polls.
News
4 months ago