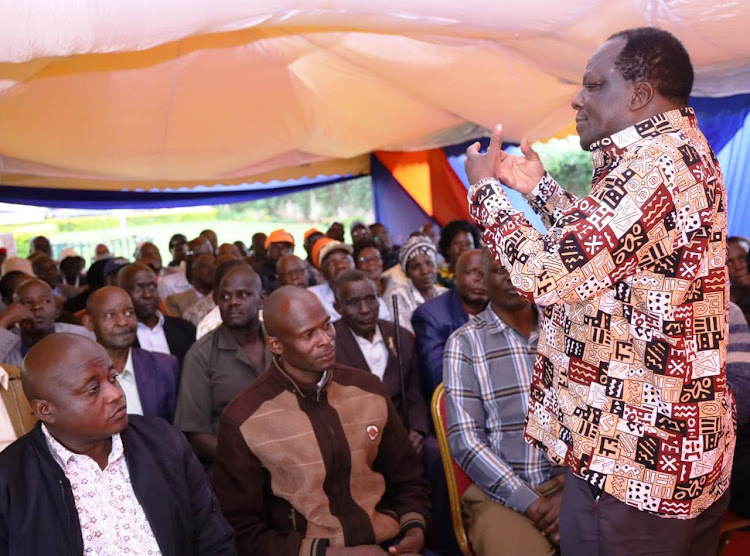 Azimio la Umoja One Kenya Coalition team in Western Kenya will now focus on zoning for MCA aspirants to ensure it wins majority seats in the August 9 polls.

Kakamega Governor Wycliffe Oparanya, the head of Azimio campaigns in Western, said ODM and Democratic Action Party of Kenya have resolved to work together ahead of  elections.

Oparanya said opinion polls will be conducted next month to pick out the most popular ward rep aspirants, who will be fronted as the coalitions's flag bearers to guarantee victory.

“As Azimio, we have many aspirants and we have decided to come together, if we aim to win many seats,” Oparanya said after meeting opinion leaders at his Likuyani residence on Monday.

A week ago, Savula and ODM Kakamega governor aspirant Fernandez Barasa struck a deal, where the Lugari MP will deputise Barasa to avoid siblings rivalry that can cost the coalition seats it could win.

The two parties pledged to share the Kakamega government equally if elected.

Nominated Senator Naomi Shiyonga, who was to run for Kakamega Woman Representative seat on the DAP-K ticket, has been asked to drop her bid and support the incumbent, Elsie Muhanda.

However, some DAP-K aspirants have threatened to support Kenya Kwanza rivals if they are unfairly forced out of the race.

While addressing supporters in Central Kenya three weeks ago, Azimio presidential nominee Raila Odinga said the outfit had agreed to allow all aspirants to campaign for one month and then identify popular hopefuls who will fly the coalition's flag.

Inside ODM, DAP-K plan to lock Kenya Kwanza out of Kakamega

New agreement will see the two parties share power on a 50-50 basis.
Counties
1 month ago

The aspirants for the posts of senator, MP and MCA say the proposed approach favours ODM.
Counties
1 month ago

Panic has gripped other aspirants on DAP-K who now fear their tickets could be recalled to create room for ODM rivals
Counties
1 month ago
“WATCH: The latest videos from the Star”
by HILTON OTENYO Correspondent, Western Region
News
24 May 2022 - 22:00