Kalonzo presents signatures to IEBC for his presidential bid

The signatures were presented on his behalf by his running mate Andrew Sunkuli.

• The signatures must be accompanied by the names of the supporters, their signatures and identity cards or passport numbers.

• The submission of the signatures presents further complications to the Azimio la Umoja Coalition who are keen on wooing Kalonzo back to their fold. 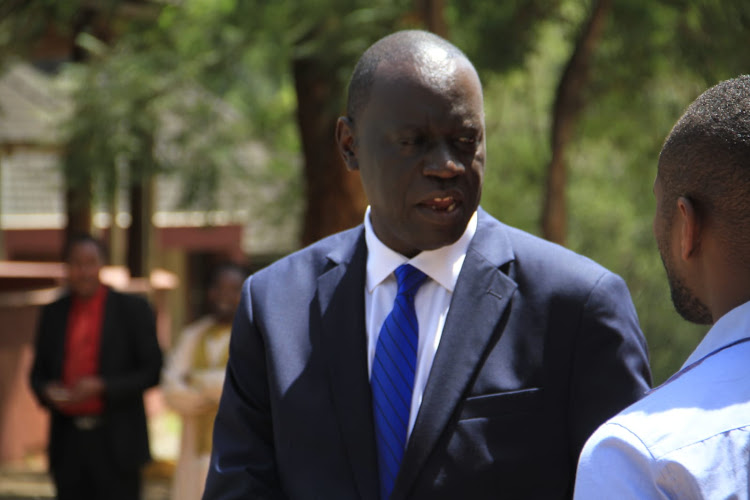 Wiper leader Kalonzo Musyoka has presented signatures of voters backing his presidential bid to the IEBC.

The signatures were presented on his behalf by his running mate Andrew Sunkuli.

While presenting the signatures at the Bomas of Kenya, Kalonzo's running mate Sunkuli affirmed that the Wiper leader would be on the ballot as a presidential candidate.

"Yes, we are on the ballot and that is why I'm here to represent my presidential candidate who is outside the country on a private trip," Sunkuli said.

Monday is the deadline set by the electoral agency for all presidential aspirants to submit to the commission 2,000 signatures of registered voters, who have backed their bids to run for the high office, from at least 24 counties.

The signatures must be accompanied by the names of the supporters, their signatures and a copy of identity cards or passport numbers.

The submission of the signatures presents further complications to the Azimio la Umoja Coalition who are keen on wooing Kalonzo back to their fold.

Kalonzo reportedly flew out of the country to London last Friday for a private visit, denting efforts by Raila Odinga's close allies to formalise discussions.

While away, the Wiper boss reportedly gagged all his close allies from commenting publicly about his political future until he returns later this week.

“Don't drag me there, please, instructions are clear that we are not giving interviews about Kalonzo, just for now,” an MP said.

But even then, Wiper party officials were on Monday holding a meeting at Stoni Athi in Machakos County which at least 500 party aspirants were attending.

Kalonzo's allies remained guarded on the agenda of the meeting but party vice-chairman Mutula Kilonzo Jnr was quoted by Nation saying Azimio matters would be discussed.

"We need to consolidate and strategise how to keep competition away and campaign plan. I expect the Azimio issues will be brought up,” Mutula said.

Raila's inner circle is in frantic efforts to woo Kalonzo back to Azimio to bolster the ODM leader's chances of winning the August 9 general election.

Kalonzo's allies have cited trust deficit concerns in Azimio as the main reason for the former Vice President's decision to play hard ball on his re-association with the Raila-led outfit.

Kalonzo bolted out of Azimio on May 16 after Raila picked Narc Kenya leader Martha Karua as his running mate.

He accused Raila of going against an agreement with President Uhuru Kenyatta promising the Wiper leader the running mate position in the August polls.

Kalonzo off to London as Azimio talks stall

The Wiper boss has left the discussions with Raila's team in disarray.
News
2 months ago

The meeting at Stoni Athi is also attended by at least 500 Wiper aspirants.
News
2 months ago
WATCH: The latest videos from the Star
by EMMANUEL WANJALA Radio, Print & Digital Reporter
News
23 May 2022 - 13:20
Read The E-Paper