Gachagua: The August election is not between me and Karua

He said the race is between his party leader William Ruto and ODM counterpart Raila Odinga.

•Gachagua chided those framing the contest in such a manner saying they are misleading the masses.

•He said the race is between his party leader William Ruto and his ODM counterpart Raila Odinga. 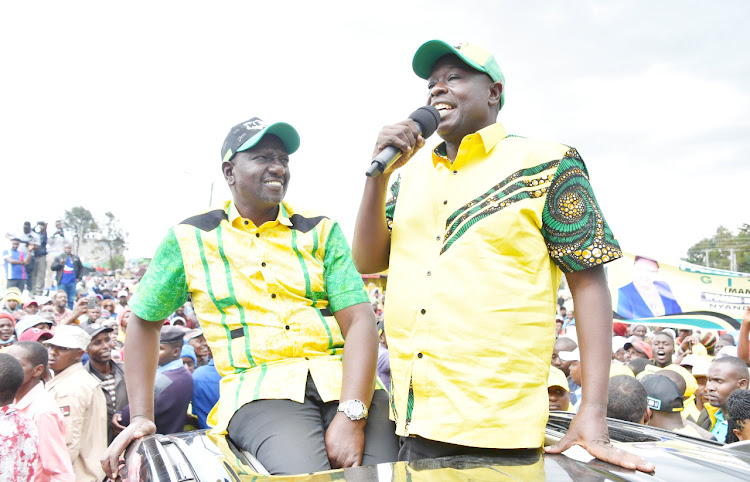 UDA party Presidential running mate Rigathi Gachagua has dismissed reports indicating the forthcoming August 9 election is a battle between him and his Azimio counterpart Martha Karua.

Speaking in Nakuru County on Sunday while on a campaign trail, Gachagua chided those framing the contest in such a manner saying they are misleading the masses.

He said the race is between his party leader William Ruto and his ODM counterpart Raila Odinga.

"I have seen reports that people are saying the August election is between me and Karua. I want to say those are lies because the race is between Ruto and Raila," Gachagua said.

The appointment of Gachagua and Karua as the running mates of the two leading presidential candidates set the stage for comparison on who among the two is best suited to lead the Mt Kenya region politically.

Ruto was first to name Gachagua as his running mate before Raila unveiled Karua a day after.

The two running mates will be jostling for the control of the vote-rich Mt Kenya region that is decisive in determining Kenya's president.

Raila's choice for Karua has been termed as a strategic move to secure the votes of the Mt Kenya region that has voted against him in the past three consecutive elections.

Raila to women: I've done my part by picking Karua, I want to see your votes

Raila said he is ready to work with women and give them a chance to transform Kenya.
News
8 months ago

Ruto: Raila picked Karua as deputy out of confusion

Raila said he chose Karua because she has proven to be a fighter and not a quitter.
News
8 months ago