TOO LITTLE, TOO LATE

October to December 2022 short rains season will also be below average, complicating matters.

•The Famine Early Warning Systems Network in May projected a likelihood that the October to December 2022 short rains season will also be below average.

•This will set the stage for an unprecedented five-season drought with an estimated 4-5 million Kenyans needing humanitarian food assistance. 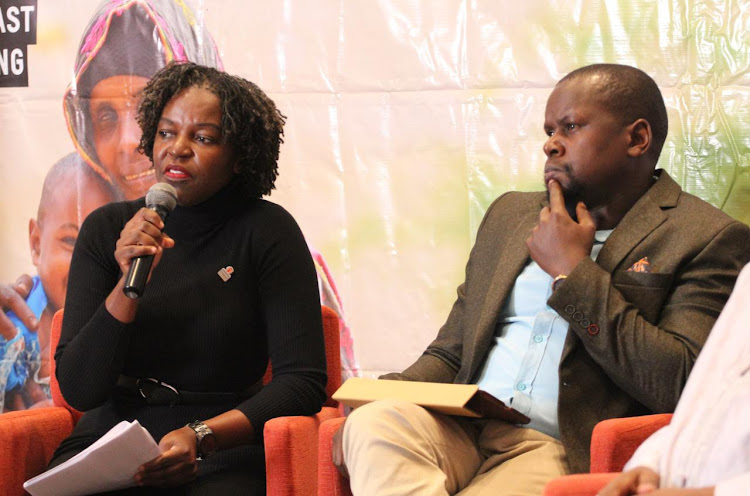 Save the Children Country Director for Kenya and Madagascar Yvonne Arunga with her Oxfam counterpart John Kitui during the launch of Dangerous Delay 2:The cost of inaction ,a report that called for humanitarian assistance to mitigate drought in the country.Photos/Enos Teche

The number of Kenyans likely to go to bed on an empty stomach is likely to hit five million by the end of the year.

Save the Children and Oxfam painted the grim picture on Wednesday after they launched a report showing that one person is likely to die from hunger every 48 seconds in drought-ravaged Kenya, Ethiopia and Somalia.

The report ‘Dangerous delay 2’: the cost of in action', shows that the world has again failed to heed the warnings.

It sheds light on what it termed as a continued failure by donors and aid agencies to prioritise local organizations at the forefront of the crisis response.

The report was launched at Radisson Blue Hotel.

“This is the worst drought in 40 years. Worryingly, the response is too little too late. We are witnessing political realignments instead of mobilizing resources for response,” he says.

Kitui says the weather forecast by the Famine Early Warning Systems Network in May had shown that there is a likelihood that the October to December 2022 short rains season will be below average.

This, he said, will set the stage for an unprecedented five-season drought with an estimated 4 to 5 million Kenyans needing humanitarian food assistance.

But resources from donors are not forthcoming.

Already, 3.5 million Kenyans are in dire need of food.

Some 1.6 million livestock, according to the government, have died.

Kitui said the number of people without food in Kenya, Ethiopia and Somalia has hit 23 million.

The figure last year was 10 million.

Kitui said the situation comes against a backdrop of crippling debt that has more than tripled in under a decade from $20.7 billion in 2012 to $ 65.3 billion by 2020, sucking countries’ resources from public service and social protection.

He said there is a lack of concrete attention to combat the effects of climate change.

“4.4 billion US dollars have been mobilised for response in Kenya, Ethiopia and Somalia that is hugely underfunded because the international community is really distracted by attention elsewhere,” Kitui said.

Kitui said only two per cent ($93.1 million) of the current $4.4 billion in appeal for Ethiopia, Kenya, and Somalia has formally been funded to date.

He said if the UN Coordinated mechanism is fully funded, the immediate needs of the communities affected across the region will be met.

He said the Sh 8.6 billion released by the government at the start of the month for the inua Jamii programme only targets one million people.

“That is very little because we know that 3.5 million people are in dire need.”

Kitui said the situation will spiral out of control if there is no collective action.

He said national and county leadership must not only respond swiftly but also invest in food security, diversify livelihood options and offer stronger social protection systems as pillars to cushion those affected.

“Institutions need to listen to early warning systems and recommendations by local organizations who understand local realities to mitigate future calamities and to foster timely humanitarian responses,” he added.

Arunga said the number of children aged 6-59 months requiring treatment for acute malnutrition in Kenya had increased as of March to 755,000 from 653,000 in August 2021 representing a 15.6 per cent increase.

“Kenyan herders have been forced to trek long distances in search of water and pasture, increasing the risk of resource-based conflict and family separation, which in turn heightens the risk of gender-based violence,” she said.

She added: “The clock is ticking and every minute that passes is a minute too close to starvation and possible death of a child, “she said.

Malnutrition leads to stunting, impairs mental and physical development in the long run, increases the risk of other illnesses, and ultimately causes death.

The Arid and Semi-arid lands humanitarian network coordinator Ahmed Ibrahim said it is a sad situation where people and livestock are dying.

“We need to start thinking about the risks and root causes of this crisis. The response must be scaled up to save lives and livelihoods,” he said.

Ibrahim said climate risks must be incorporated into planning.

On Friday last week, a high-level ministerial meeting on the drought, led by IGAD executive secretary Dr Workneh Gebeyehu, appealed for $6.3 billion (approximately Sh730,485,000,000) to address the drought situation in the region.

The 2016-2017drought brought millions of people in the region to the brink of famine, which was only prevented through a rapid and timely humanitarian response.

Artan says recovery after drought for pastoral communities is always the most challenging
News
1 month ago
WATCH: The latest videos from the Star
by GILBERT KOECH News Reporter
News
18 May 2022 - 15:04