• Mamo said the award affirms Nema's commitment to excellent service delivery to Kenyan citizens and a great inspiration to other public servants. 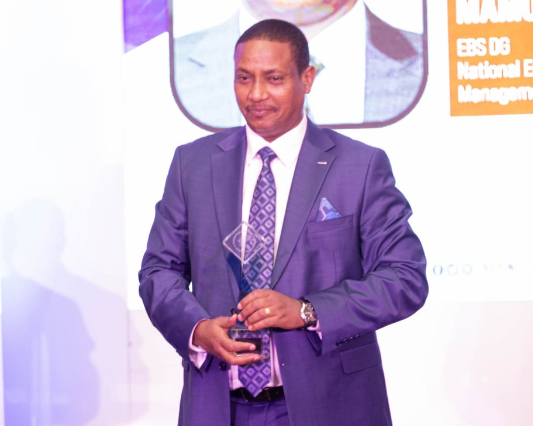 The coveted award recognises and promotes excellence in the public sector in Africa.

The Kenya High Commissioner to Ghana, Ambassador Eliphas Barine was present at the ceremony.

Mamo said the award affirms Nema's commitment to excellent service delivery to Kenyan citizens and a great inspiration to other public servants.

"As I proudly hold this award, I dedicate it to the commitment of my entire staff at Nema, My Board of Management and the leadership of my CS (Keriako Tobiko)," he said.

"Kenya is indeed a bench mark of Excellence in Environmental Matters in the region... Our efforts and sacrifices to strive to provide a clean and healthy environment for all Kenyans are not in vain."

Mamo's efforts to spruce up the environment helped him bag the award.

Environment Cabinet Secretary Keriako Tobiko said the award is an excellent achievement not only for Mamo but the country.

He added that it is also a great inspiration to the public sector in the country.

Before receiving the award on Friday evening during the gala, Mamo had appealed to African governments to wage war on plastics, as he shared on the success Kenya has achieved on plastic ban.

Plastic has been a menace world over.

However, countries inched closer to getting the solution after nations overwhelmingly passed a resolution on how to tackle it from source and along the value chain.

UNEP says at least 11 million tonnes of plastic are dumped into water bodies every year.

For instance, a study supported by Nema in 2017 showed more than 50 per cent of livestock had ingested plastics.

The study conducted in Dagoreti, Kiserian and Kenya Meat Commission showed that affected livestock was weak, with lower milk and beef production.

The government says the ban will help protect the environment and improve living standards.

Today, National Environment Management Authority says the ban on single-use plastics is over 95 per cent.

On March 2, heads of states, environment ministers and other representatives from 175 nations, endorsed a historic resolution to end plastic pollution, and forge an international legally binding agreement, by the end of 2024.

The resolution, based on three initial draft resolutions from various nations, establishes an Intergovernmental Negotiating Committee (INC) which will begin its work this year, aiming to complete a draft legally binding agreement by the end of 2024.

That in turn, is expected to present a legally binding instrument, which would reflect diverse alternatives to address the full lifecycle of plastics, the design of reusable and recyclable products and materials, and the need for enhanced international collaboration to facilitate access to technology, to allow the revolutionary plan to be realised.

Before 2017, about 100 million plastic bags were used in Kenyan supermarkets every year.
News
2 months ago
WATCH: The latest videos from the Star
by GILBERT KOECH News Reporter
News
17 May 2022 - 15:02