Celebrations in Central after Raila picks Karua for running mate

Residents of Murang'a, Kiambu and Kirinyaga break into dance and praise songs

• In Kirinyaga, residents who had been waiting with bated breath for five hours took to the streets in celebration. 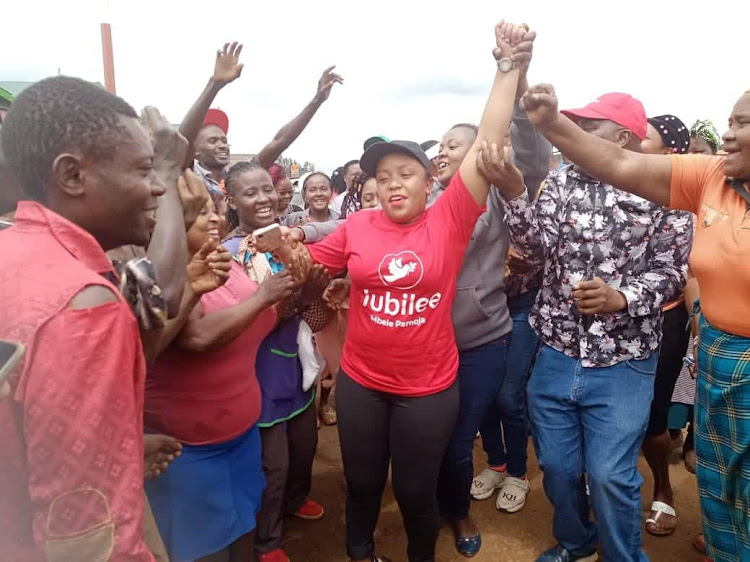 Widespread celebrations rocked Central and other parts of the country following Raila Odinga's naming of Martha Karua as his running mate.

Residents of Murang'a, Kiambu and Karua's home county of Kirinyaga broke out in dance and praise songs, saying the Azimio ticket will be a game changer in the presidential race.

Raila and Karua are expected to face off with Deputy President William Ruto, who on Sunday named Mathira MP Rigathi Gachagua as his running mate.

In Kirinyaga, residents who had been waiting with bated breath for five hours took to the streets in celebration.

A similar scene was witnessed in Murang’a where residents hailed Raila's decision to pick the Narc Kenya party leader as an earthquake that will change the direction of politics in Mt Kenya region.

In Kiambu, jubilation rocked major towns, with Azimio la Umoja supporters saying Karua was the best pick to win women's votes for the coalition across the county.

In Mwea, residents thronged Wang'uru stadium to listen to Karua's appreciation speech from a campaign van that had been mounted with huge speakers.

Soon after the speech, residents who could not contain their excitement took to the streets of Mwea town as they chanted Karua and burst into praise songs for the "Iron Lady" of Kenyan politics.

Ndambiri praised Raila for picking Karua, saying the political landscape in Mt Kenya has changed to his favour.

"I have been a proponent of Raila-Karua government and what Raila has done will remain an unforgettable experience in the historical and political chapter of this nation. With her appointment, it shall be a big boost to Raila's presidency as his support has overtly shot in Mt Kenya region,"  Ndambiri said.

He hailed Karua for her steadfastness, passion and vigour in the fight for justice and quest for broader democratic space, as he described her as a trailblazer worth emulating.

Kabinga said Karua is the most suitable of them all due to her high level of accountability.  "I'm sure there are those individuals who will have sleepless nights from now until August because of their tainted images. We are proud Karua will streamline public service and seal all loopholes where public funds leak," he said.

In Gichugu, which is Karua's home constituency, locals could not hide their excitement. Njagi Makanga, a local leader, acknowledged the respect that has been accorded to Gichugu through Karua's appointment.

"It's an honour to have a leader of such calibre in such a position. It's a defining moment in the history of Kenya that will remain unforgettable."

Emily Wanja said Karua is up to the task due to her firmness, charisma and unbowed character.

In Thika town, residents said Karua was the best leader to represent the Mt Kenya region and ensure that the region's interests are prioritised in the next government.

"We are grateful to Raila for recognising the role of women in the country's leadership and naming a daughter of the mountain as his running mate. This move has even turned around majority of the votes especially in Central to support Azimio," resident David Waweru said.

He said Karua was a better bet for the region compared to Gachagua.

"Karua has been at the forefront championing for social justice, democracy and fighting corruption in this country. On the other hand, Gachagua has been implicated in graft cases, which is heavily denting his support in the region," he said.

In Gatundu town, women led by Regina Wambui hailed the former Prime Minister for picking a woman to deputise him, saying it's an indication that if the duo ascend to power on August 9 they will empower and support women.

"We are glad that the efforts of women in our communities and our country are being recognised and reciprocated. This will go down in history just like what happened in the USA. We are fully behind the two to propel our country forward," Wambui said.

In Murang’a, many locals expressed happiness with Raila's choice of Karua, saying it will make women feel more included in government.

Mary Wanjiru from Ruchu in Kandara said the decision has made the womenfolk feel more included in the Azimio la Umoja set-up.

Wanjiru said they also liked the calm manner in which Raila conducted the exercise compared to the stand-off experienced before Ruto settled on Gachagua.

“It shows he is a good leader and likes order. We are happy that a woman has been chosen because a woman always puts others before herself," Wanjiru said.

Back in Kirinyaga, Kabinga said they were looking forward to intensifying the Azimio la Umoja campaigns throughout the county in the run-up to the elections.

"What we were doing before today were just press-ups. Moving forward our political campaigns and structure will change. We shall visit every village canvassing votes for the Azimio team. We have to restore the lost glory," the MP said.

"We are proud that as President Uhuru Kenyatta proceeds for retirement, Mt Kenya will be left in a safe pair of hands. We believe Karua is the next Mt Kenya supremo."

Rose Wachira said it would be a great privilege to serve Karua as her woman representative.

Other Kenyans were equally beaming with excitement over Karua's appointment

Antony Muriithi, a resident of Mwea, praised Karua for her outstanding and untainted leadership. He said Karua will help overhaul different public sectors for the betterment of Kenya.

Everlyn Mumbi said Karua will not only help put Kirinyaga on the map but will help propel responsible leadership.

Lucy Wanjiru from Mathioya in Murang'a expressed confidence that women will rally behind Karua to show their support for Raila.

“Mt Kenya politics has just taken a turn, especially after Ruto picked Rigathi. Whoever wins in the elections, we expect women in Central will be well empowered, especially in the agriculture sector on which most families rely,” she said.

She however praised Karua as a straight forward leader.

“Karua’s ability to lead is clearly distinct. This is a game changer. We as women are now solidly behind Azimio because of our support for her as a woman. Raila has done well to pick a woman. He has remembered the women of this country," she said.

She appealed to Raila to lower the cost of education should he be elected president.

“Majority of us elderly women do not access cash transfer. We hope he will make these things right and appoint more women in his government,” she said.

"For the first time, a woman is poised to occupy the second-highest office in this country," she said.

In Trans Nzoia, Woman Representative Janet Nangabo led celebrations in Kitale, saying Raila had shown his intention to include women in his government.

"The picking of Martha Karua clearly demonstrates who among the top contenders wants to achieve the gender rule," she said. 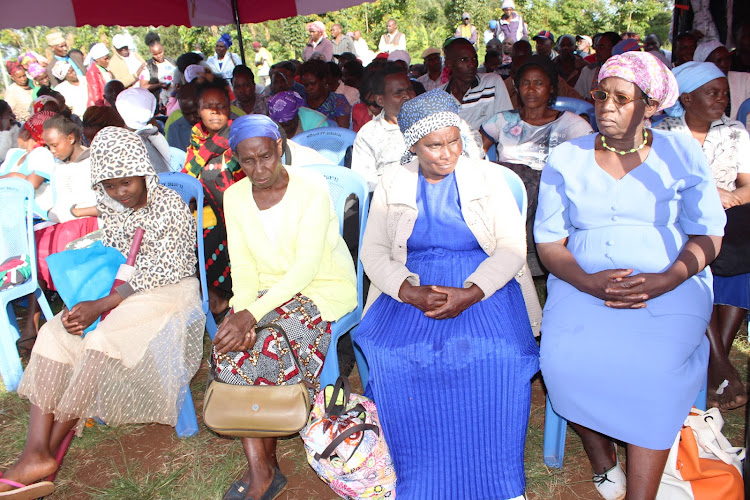 Women at Kimorori grounds in Kenol, Maragua constituency, during a meeting with Murang'a Woman Representative Sabina Chege on May 16, 2022.
Image: Alice Waithera

If they win, Kenya will be in great hands - Martha Karua parents say

Wanjiru said her daughter Karua will make a great deputy president.
News
1 month ago
“WATCH: The latest videos from the Star”
by STAR TEAM
News
17 May 2022 - 05:00