Raila is expected to name his running mate anytime from now.

•Brivon from Kisii County has said he expects Raila to name a running mate from Mt Kenya.

•Further, he said either former Gatanga MP Peter Kenneth or Martha Karua would be best suited for the position. 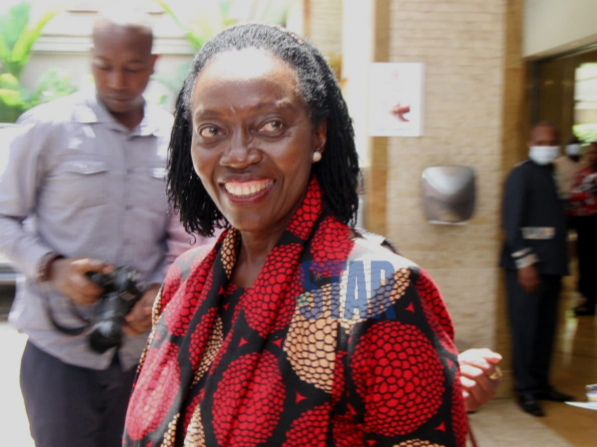 Narc Kenya Party leader Martha Karua after an Interview for the Azimio running mate position at Serena Hotel on May 9,2022.
Image: ENOS TECHE

A section of Azimio la Umoja One Kenya Alliance supporters have aired their opinions on who would be best suited for the running mate position in Azimio.

In an interview on Citizen TV on Monday, Brivon from Kisii County said he expects Raila to name a running mate from Mt Kenya.

Further, he said either former Gatanga MP Peter Kenneth or Narc Kenya leader Martha Karua would be best suited for the position.

Vincent also went ahead and urged the ODM Party leader to name Karua as his running mate, saying that she is more skilled and is conversant with politics as she has been in the political arena for many years.

Judith who is also a supporter of Azimio la Umoja said she supports Karua.

"Kenyan women have been left out in terms of opportunities for leadership and this will be a great opportunity for one of them to be in power to represent millions of women in Kenya," she said.

For Stephen from Machakos, he supports Kalonzo, saying the Wiper leader has been Raila’s ally for a long time.

Further, he said that Kalonzo has more votes from the entire nation, not just from the Ukambani region.

"It is also important to allow women to lead since they have been left out for a long time," he said.

Further, he noted that Mt. Kenya deserves the post as it would bring over three million votes to Azimio compared to Ukambani which has got only two million votes.

“We know what Raila and Karua have stood for. History is out there for everyone to see. Raila means well for this country. We are pregnant and we expect a baby. The gender of the baby should be a lady,” Jubilee supporter said.

Michael Okumu from Nairobi said that he wants Raila to choose Karua as she is a strong woman.

“ If Raila chooses Karua, this will give us great support as we will get more votes. Karua is mature in terms of politics. Even though she has been having wrangles with Raila, they have sorted that and can comfortably work together,” he said.

An anxious yet hopeful mood rented the air for a better part of Monday morning.
News
2 months ago

Sources have intimated to the Star that Azimio Panel had said Karua is rated highly for the position.
News
2 months ago
by MERCY WAIRIMU
News
16 May 2022 - 12:41