•Ruto was to name his deputy on Saturday morning but the unveiling was pushed to 1 pm, later 3 pm and eventually ended up not happening.

•The DP was to pick either Tharaka Nithi Senator Kithure Kindiki or Mathira MP Rigathi Gachagua as his deputy but their allies failed to agree. 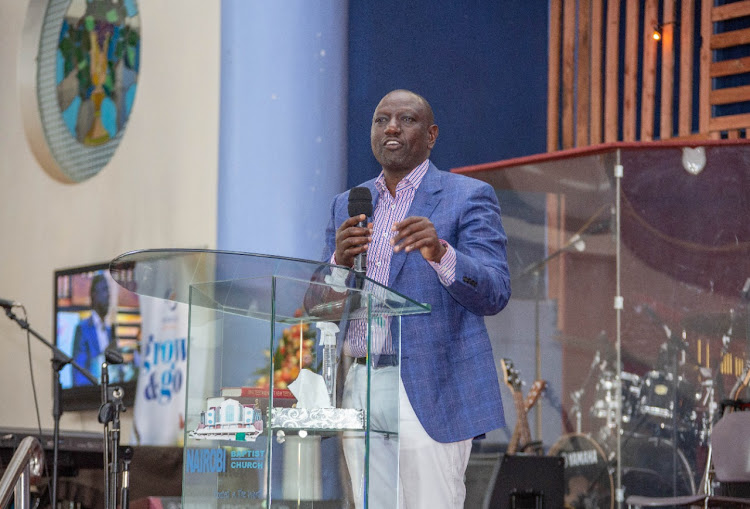 Deputy President William Ruto postponed the naming of his running mate to Sunday after a long day meeting at his official residence failed to unlock the stalemate.

In a press briefing at midnight, DP Ruto’s Head of Communications Hussein Mohamed said that the process of picking Dr Ruto’s running mate had been finalised and Kenyans would be informed later today.

"The running mate issue was extensively discussed today and we are happy to announce that we have a decision and the decision will be announced on Sunday, May, 15," he said.

Ruto was to name his deputy on Saturday morning but the unveiling was pushed to 1 pm, later 3 pm and eventually ended up not happening after dissatisfaction rocked his boat.

The DP was to pick either Tharaka Nithi Senator Kithure Kindiki or Mathira MP Rigathi Gachagua as his deputy but their allies failed to agree and the two leaders walked out of his residence at around 5 pm.

Kindiki was the first person to leave the DP’s residence and was followed by Gachagua some few minutes later, with reliable sources claiming that the negotiations failed to bear fruits resulting in the exit of the two leaders from Ruto's residence.

Other leaders, including Kenya Kwanza Alliance principals and some Mt Kenya MPs, were said to have continued with the negotiations for the better part of the night, making what was to be an easy affair turn into a major crisis.

Sources indicate that Gachagua and Kindiki were subjected to a " nomination exercise"  whose results caused deeper divisions.

For the better part of the day, journalists who had converged at the DP's residence were forced to pitch tents at the main entrance as they could not be allowed in.

Ruto had told Kenyans that picking a running mate was to be an easy affair but the task proved difficult after Mt Kenya leaders failed to agree on his running mate choice.

"The issue of running mate is an important one but that issue doesn't give us sleepless nights, " Ruto had said.

The DP was set to name Kindiki as his running mate but allies of Gachagua protested the move.

The alliance is expected to name the running mate before Monday's deadline, set by the Independent Electoral and Boundaries Commission.

Negotiations failed to seal a deal.
News
8 months ago

"I believe in him... I'm confident he will be chosen."
News
8 months ago

Gachagua's supporters warned they will quit the Kenya Kwanza Alliance.
News
8 months ago
Post a comment
WATCH: The latest videos from the Star
by MERCY ASAMBA
News
15 May 2022 - 09:40
Read The E-Paper