Kalonzo wild card that could throw Raila off balance 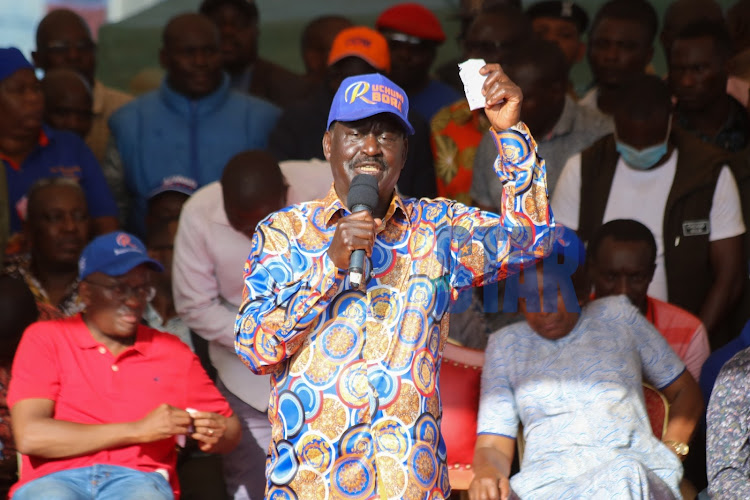 Wiper leader Kalonzo Musyoka has thrown the Azimio brigade into confusion amid reports that he plans to ditch the coalition if Raila Odinga fails to name him running mate.

Raila will officially name his second in command on Monday at the Kenyatta International Conference Centre at 11 am.

By last evening, inside sources said Raila had settled on Narc Kenya  leader Martha Karua, unsettling the Wiper team that has insisted its either “Kalonzo or the ballot.”

Tellingly, Kalonzo skipped Raila's rally in Nairobi's Kamukunji grounds although he was in the city.

Instead, the Wiper leader held talks with his new found ally, Kanu chairman Gideon Moi as his allies said they are moving to court to dis-engage from the Azimio.

Makueni MP Daniel Maanzo termed the agreement unconstitutional and said Raila is no longer interested in being president.

"We [Wiper team] have only one option, to run for president. Martha Karua cannot even hold a meeting in Central. She adds no value. Raila no longer wants to be president,"Maanzo told the Star

Last week, Makueni Senator Mutula Kilonzo publicly said Kalonzo will get back to the presidential contest if he is not the Azimio running mate.

Since teaming up with Raila on March 12, Kalonzo and Raila have only campaigned together in Turkana as suspicions between them deepen.

At the Kamukunji rally on Sunday, Raila vowed to humiliate Deputy President William Ruto at the ballot.

His allies took turns to hit out at the Ruto ticket with Mathira MP Rigathi Gachagua, warning Kenyans against electing “thieves.”

“I will teach him a lesson that he will never forget. After the elections, he will go home for good,” the ODM leader said.

“He does not have manners. What is this he keeps saying about me being a dynasty. If I was a dynasty, would I have been jailed for nine years as he suckled."

Karua said Raila has good plans for the youth, women and the disadvantaged members of the society.

“We must know that our country is in danger. If you elect people who are crooked, we will land in a ditch and it will take a century to come out,” she said.

Arati said two people with a tainted past have teamed up in Kenya Kwanza seeking to lead the country.

“Do not even think about voting for them if you care about this country,” he said.

Sifuna said a bad person has just teamed up with another bad person.

“This country is going to the dogs. The person who has been named running mate will be needed in court every now and then; when will he work for the people,” he said.

Junet said Kenyans should not “let two thieves lead them. That cannot happen because such dirty people cannot lead the country”

Odhiambo urged Raila to announce a running mate who has a reform agenda for the country.

“Let that person who you will pick to be your running mate be a woman,” she said.

Kenneth said Raila is committed to building the country while rivals are pursuing personal interests.

“Baba is keen to fight corruption while our competitors want to perpetuate it,” he said.

Gachagua is a UDA member who has also been central in Ruto's behind-the-scenes political negotiations with partners.
News
6 months ago

Raila announced that he will name his running mate on Monday.
InPictures
6 months ago

Some media reports have said that Kalonzo could vie for the country's top seat.
News
6 months ago

Raila brings on board experienced and seasoned regional bigwigs to lead rev up his vote hunt.
News
6 months ago