•The Moon will appear larger than usual because it will be at its closest point to Earth of its orbit, giving it the name super Moon.

•The only sunlight reaching the Moon during the full eclipse will be passing through the Earth's atmosphere. 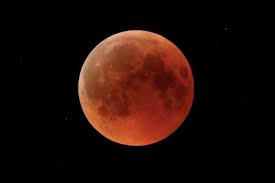 Earth will come between the Sun and the Moon.
Image: REUTERS

One of our planet's most stunning sights is coming to the skies - a super blood Moon.

In the year's only full lunar eclipse, Earth will come between the Sun and the Moon.

It will be visible with the naked eye before dawn on Monday in most of Europe. The Americas will get a great view on Sunday evening.

The Moon will appear larger than usual because it will be at its closest point to Earth of its orbit, giving it the name super Moon.

It will also be called a super flower blood Moon. In the Northern Hemisphere, a full moon in May is often called a flower Moon because it coincides with the Spring flowers.

The only sunlight reaching the Moon during the full eclipse will be passing through the Earth's atmosphere.

This light will be blood red, from all Earth's sunrises and sunsets reflected on to the Moon's surface, explains Dr Gregory Brown, astronomer at the Royal Observatory in Greenwich, London.

"You'll actually be seeing every sunrise and every sunset occurring around the Earth at once. All of that light will be projected on to the Moon," he told BBC News.

On Monday, western parts of Europe will get a good but short view as the Moon will set during the eclipse. Look low on the horizon between 0230 and 0430 BST and you'll see the moon falling into shadow before glowing red. It should be visible in Africa too.

In the UK watching from a high vintage point like a hill or tall building will be essential because of the Moon's very low position in the sky.

The UK will get a better view of the earlier part of the eclipse, Dr Brown explains.

As Earth's shadow starts to cover the Moon, it slowly takes a bite out of it. The Moon will be fully eclipsed and red at 0429 BST. It will then set, though the eclipse will continue until 0750 BST.

The Americas will be treated to the full spectacle, lasting 84 minutes. If you're in western US and Canada, the time to watch the horizon is Sunday evening as the Moon rises.

You can see it with the naked eye, while looking through binoculars or a small telescope will enhance the red colour.

Of course, the very best vantage point for witnessing this eclipse is a place very few people have been lucky enough to visit - the Moon itself.

"If you were an astronaut standing on the Moon, looking back towards Earth, you'd see a red ring running around the outside of our planet," Dr Brown explains.

The Moon will turn red in the early hours of Monday during a brief total Lunar eclipse between 06:34 am and 09:51 am.The total phase of the lunar ...
News
3 years ago

The world will on Friday experience a rare spectacle of the longest lunar eclipse in the 21st century.The eclipse will last for about four hours and ...
News
3 years ago
WATCH: The latest news from around the World
by BBC NEWS None
News
15 May 2022 - 10:32