Gachagua is a UDA member who has also been central in Ruto's behind-the-scenes political negotiations with partners.

•Kenya Kwanza Alliance had faced a stalemate after both Gachagua and Kindiki maintained a hardline stance on the running mate slot.

•Earlier, Gachagua said being Ruto's running mate is not a matter of life and death for him. His agenda, he said, is to secure victory for the team. 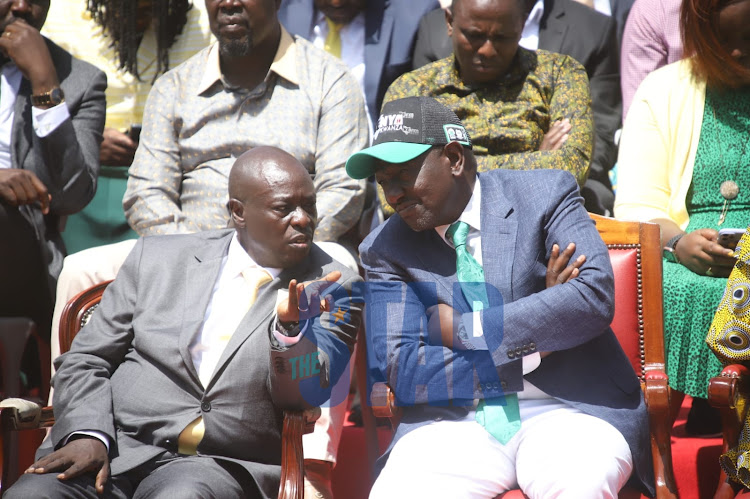 Deputy President William Ruto has named Mathira Member of Parliament Rigathi Gachagua as his running mate, bringing to an end months of heightened anxiety and speculation over his deputy choice.

Speaking at his Karen Official residence, Ruto said after a 17-hour meeting, Kenya Kwanza Alliance, settled on Gachagua because he is an astute debator, a principled, resilient and fearless fighter for the right cause.

"Gachagua is my friend whom  I have worked with, especially on that Bottom-Up Economic model and we started that journey together. He understands people's issues, he is passionate about ordinary people," Ruto said.

Kenya Kwanza Alliance had faced a stalemate after both Gachagua and Tharaka Nithi senator Kithure Kindiki maintained a hardline stance on the running mate slot.

But after the 17-hour talks, the alliance settled on Gachagua, an announcement that was made in absence of Kindiki.

The DP, however, thanked the senator for his support and said he will sign an executive order immediately after he assumes office that will outline the roles of the deputy president.

"The deputy president under Kenya Kwanza will perform real duties as assigned to him by the president," he said.

"My deputy and I have agreed when it is time to leave we will leave and we will mentor other leaders in Kenya Kwanza formation," he said.

There had been intense speculation about Ruto's running mate, but the DP has been holding his cards close to his chest to avoid any premature disclosure that would hurt his allies.

The number was later narrowed down to Gachagua and Kindiki, with DP on Sunday thanking those who were eyeing the DP job for standing with him.

Gachagua, 57, who landed the highly coveted position, is a UDA member who has also been central in Ruto's behind-the-scenes political negotiations with partners.

He has been a fierce defender of DP Ruto and the UDA party and a critic of President Uhuru Kenyatta.

He has been overseeing Ruto’s presidential campaigns in the Mt Kenya region after he fell out with Uhuru.

Earlier, Gachagua had said being Ruto's running mate is not a matter of life and death for him. His agenda, he said, is to secure victory for the team.

But on Saturday he appeared to have changed his tune after his allies insisted that he was the right candidate for the top job.

“I am not with William Ruto to become deputy president. I am supporting him to champion economic empowerment. What brought us together is to revive our economy,” Gachagua, who hails from Nyeri County, had said.

Gachagua's supporters warned they will quit the Kenya Kwanza Alliance.
News
6 months ago