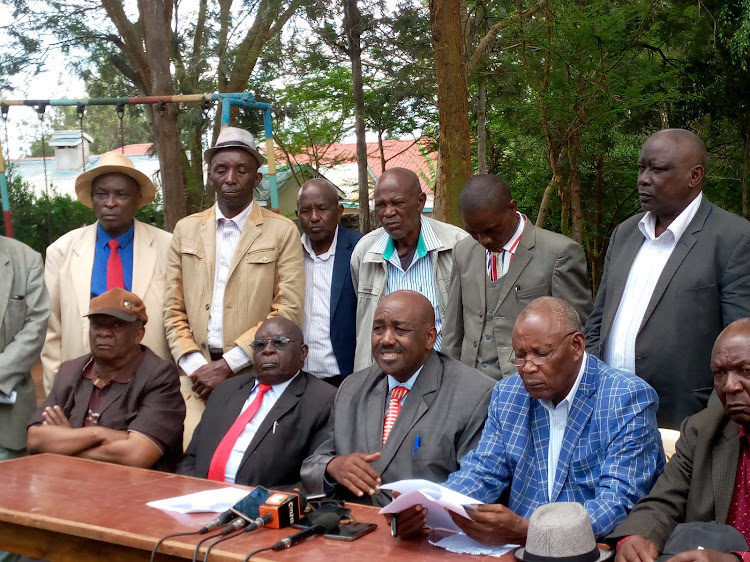 The politics on who is going to deputise Azimio's presidential candidate Raila Odinga is gaining momentum as elders from Akamba governing council has threatened to revolt if Wiper's Kalonzo Musyoka isn’t named.

Speaking to Star on Thursday, Akamba Governing Council of Elders national chairman Boniface Kilonzo said the community is fully supporting the candidature of Raila and Kalonzo.

He said Kalonzo is the most experienced politician, and having ceded his presidential quest, a running mate post will be the only ideal position. He said any other ticket might have a dire consequence in Ukambani region.

Kilonzo said despite the region being fully behind the Azimio coalition, there is a growing need from residents as well as leaders that the Kalonzo, Raila ticket should be retained similar to 2013 as well as 2017.

He said President Uhuru Kenyatta should help to resolve the stalemate or they risk losing the presidency to Kenya Kwanza Alliance.

“We as Kamba community have one request that Stephen Kalonzo Musyoka be named as Raila's running mate and our community will support but failure to this, Raila presidency might be at stake,” Kilonzo said.

The elders  described Kalonzo as a seasoned politician with an unmatched pedigree in leadership.

“We are reaching out to the Akamba community and everybody. We are going to help as much as we can to correct the political leadership," he said further rallying Kenyans to preach peace and unity across the country.

About two days ago, the Kikuyu Council of Elders held an event at their office and endorsed Martha Karua as a suitable candidate for Raila.

Led by national chairman Wachira Kiago, the elders sacrificed a black sheep to cement their stand.

“We as the elders feel that Raila should pick Karua as his running mate as she has demonstrated her leadership skills on various platforms,” Wachira said.

Sonko guaranteed Raila he was going to be the next president only if he onboarded the wiper party boss as his running mate.

“Kalonzo has over 3.5 million votes nationally, my votes are about 1.5 million and my votes are under Kalonzo which makes him have over 5 million votes, I would urge Raila to be keen with those surrounding him as they are the ones misleading him,” Sonko said.

Raila is expected to unveil his running mate on Monday after he was presented with a list of three candidates to pick from.

Among them includes Karua, Kalonzo and Peter Kenneth.

The running mate interviews were conducted by a panel of eminent people on May 9 and May 10.

The Independent Electoral and Boundaries Commission had set May 16, as the deadline for submission of running mate names by presidential aspirants.

They slaughtered black sheep as a mark of endorsement, saying she's best choice
News
1 week ago

Raila's running mate: Will it be Kalonzo Musyoka?

"The panel wishes to inform the public that it has dispatched it's recommendations to Raila."
News
1 week ago

Raila's running mate: Will it be Peter Kenneth?

The running mate interviews were conducted on May 9 and May 10.
News
1 week ago

Raila to receive three names for deputy on Thursday

She said she is best suited to fill in the position
Counties
1 week ago
“WATCH: The latest videos from the Star”
by AMOS NJAU and @Njaumburuh
News
14 May 2022 - 05:00