Kingi denied that Raila made him what he is today.

•Kingi who fell out with Raila after forming the PAA party dismissed Raila's statement that he (Raila) made him what he is now.

•On Thursday, Raila said he picked Kingi when he was fresh from University and led him through the political ranks to what he is today. 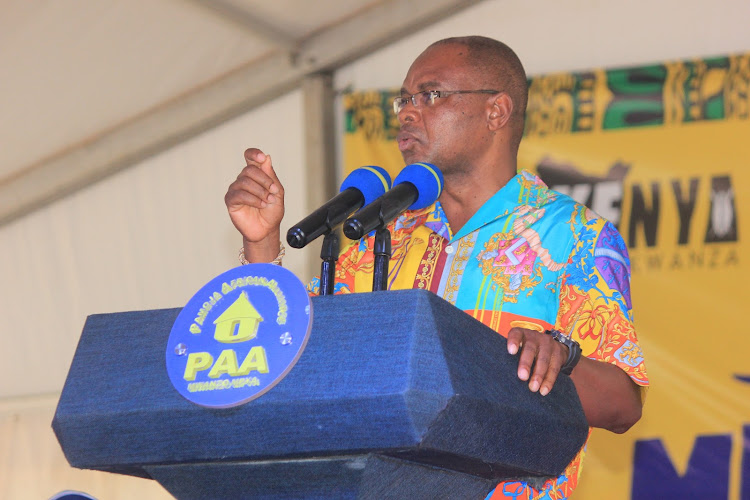 Speaking at Karisa Maitha grounds on Friday during a PAA delegates meeting, Kingi said he has respect for the Azimio One Kenya presidential flag bearer but the interests of the region come first.

"I have not betrayed Raila. It is Raila who has betrayed the region. Kilifi delivered almost all the seats to ODM in 2017 but received not even a single nomination. I went to beg Raila to nominate the ODM campaign manager but he declined," Kingi said.

"Worse still he brought people from outside the county and forced me to nominate them to the Kilifi county assembly."

Kingi who fell out with Raila after forming the PAA party dismissed Raila's statement that he (Raila) made him what he is today.

"During the nusu mkate government, I was appointed as a minister by Raila but that was not a favour. The appointment was as a result of the votes the region delivered to him and by all means, he had to appoint someone from the region whether me or any other person," he added

The governor said it is time Raila passes the baton to youthful leaders.

"Mzee we respect you but it’s time you give a chance to the new kids in the block. We will respect you," he added.

He said he is working with Ruto because of the region.

He clarified that PAA is in Kenya Kwanza as a partner.

"We have not joined UDA. We will field candidates in all positions except the presidency," he said.

On Thursday, Raila said he picked Kingi when he was fresh from University and led him through the political ranks to what he is today.

The ODM leader termed Kingi as ungrateful and a leader who cannot be trusted.

“I took him to Magarini when Harry Kombe, the MP then decided to desert me. I held his hand and told the residents that he was the best replacement for Kombe. He was elected as MP.

"In 2013, I took him across the county and he was elected as governor for two terms. I made him minister in different ministries but he has given me a donkey’s kick. Please pay him by kicking him and his party out of this region,” said Raila

Raila said before Kingi formed his party, he went to him and advised him against ditching him but he went ahead and registered the party.

“He came to me when I was with Junet and Governor Joho. I asked him to stay but after a few months he said he has formed his own party,” he added

He termed him as an egocentric person for always thinking about his welfare and not the public.

He said it was shocking to see him ditch the party after building it.

“Who does that? You toil to build a house and once you finish building the house you leave it to start another,” said Joho.

He was accompanied by Cotu boss Francis Atwoli, Peter Kenneth, Suleiman Shahbal and other Kilifi leaders

He termed Kingi as ungrateful and a leader who cannot be trusted.
Counties
4 days ago

Kingi defended his support to Deputy President William Ruto saying it because of the region.
InPictures
3 days ago
by ELIAS YAA
News
13 May 2022 - 18:13