•During his testimony in court on May 13, Joel, a witness of the Dusit D2 terrorist attack said his life took a sharp painful turn, parallel to his dreams.

•This was after he was detained for over a month after investigators confirmed that had ferried one of the attackers in his taxi. 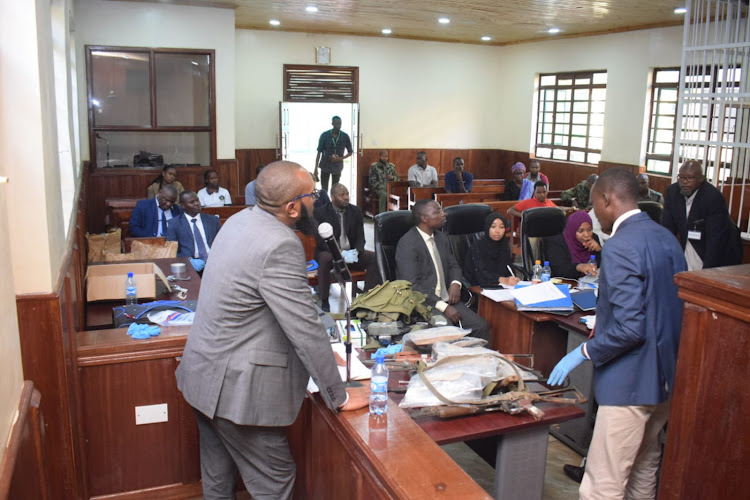 Court session during the hearing of the Dusit D2 terrorism attack at Kahawa Law courts on May 13, 2022.
Image: CHARLENE MALWA

Joel Ng'ang'a, only wanted to make enough money to support his family when he reported to his taxi station on January 15, 2019.

During his testimony in court on May 13, Joel, a witness of the Dusit D2 terrorist attack said his life took a sharp painful turn, parallel to his dreams.

This was after he was detained for over a month after investigators confirmed that had ferried one of the attackers in his taxi.

When a man wave him down at Two Rivers Mall, he moved quickly towards him. He was dressed in a black blazer and a white shirt.

"The person wanted to be taken to Riverside 14 and did not ask the price. He simply jumped behind and we left," he told the court.

While on the move, he said the client kept the conversation simple, spending most of his time on the phone.

"He was speaking in a language I assumed was Kisomali with bits, except the last bit when he asked the person on the other end where he was in English," he continued.

The client, he said, alighted before the drop-off point and rushed towards Dusit.

"Even before I could pack, I heard a loud bang followed by multiple gunshots," he recounted.

"I left the car and took off, joining the crowd that was running towards the main road," he added.

Joel said he went to sit somewhere on Waiyaki Way where he heard on the media report that there was a terror attack.

"I left for home in a matatu and went back only to be informed that I could not access the area and recover my car," he explained.

While outside Dusit, Joel said he received a call from a police officer, asking if he was the owner of the car. He asked that they meet.

"We drove to Dusit, then I was taken to Anti-terror Police Unit headquarters (ATPU) where I was questioned and released," he said.

The next day, the same officer phoned him asking to meet again, at his work station in Gigiri.

"That day, I was questioned but told that I would not be released. I was held for a month and three days," he recalled tearfully.

Unable to hold back his tears, Joel said after his release, he was reduced to a beggar relying on friends and relatives to take care of his family.

Two other taxi drivers, who worked at the mall also narrated to the court how they escaped the attacks with gunshot wounds.

Charles Muthee, told the court he was busking on the pavement near his car when he heard a loud bang. His friend Albert, was inside his car.

"We both ran to hide behind our cars when multiple gunshots followed the bang," he said.

"I wasn't feeling anything and didn't know I had been shot until after 15 minutes later when I touched the right side of my stomach," he said.

The two told the court that they dragged themselves through a panya route towards Prime Bank where they called for help getting to a hospital.

"The cars were turning on their lights and moving on. Bodaboda riders came to our help and took us to MP Shah hospital," said Charles.

"I was sweating and was in so much pain before I was operated on and a bullet removed," he said.

Albert Njihia had three gunshot wounds near his stomach and around his waist.

"Up to date, I get so scared when I hear loud bangs. My health has never been the same and for a long time, I could not get a job," said Albert.

The three were testifying in a case where three people have been charged with multiple charges including committing acts of terrorism that resulted in the death of 21 people in 2019, aiding and abetting the commission of a terrorism act and obtaining documents by false pretence, conspiracy to commit a terrorism act and being in the country unlawfully.

The first accused is only known by alias Mire Abdulahi, while the second and third are Hussein Mohamed Abdile and Mohamed Abdi Ali respectively.

Ali, who is charged with facilitating an act of terrorism is out on bond while the first two accused are still being held in custody.

Khalid was the suicide bomber who died first by detonating a vest before other terrorists followed with bullets and other explosives.

He was seen talking on the phone before he blew himself up.

He was apparently asking the other terrorists where they were because the time for the attack had lapsed.

The al Shabaab video also claims three of the attackers were Kenyan while two were Somali. They could be heard speaking in Kiswahili.

They had all been to Somalia for terror coaching and radicalisation before they came back to execute the attack.

The five attackers were seen dining together.

They claimed their assault was provoked by US President Donald Trump's decision to recognise Jerusalem as the capital of the Jewish State in reference to Israel.