Atwoli said that Kenyans must be wary of the tricks within Ruto's UDA party.

• Atwoli said the region is fully behind the Azimio La Umoja One Kenya Coalition, led by its presidential candidate Raila Odinga.

• Mudavadi and Wetangula are tasked to ensure that the team gets at least 70 per cent of the Western votes. 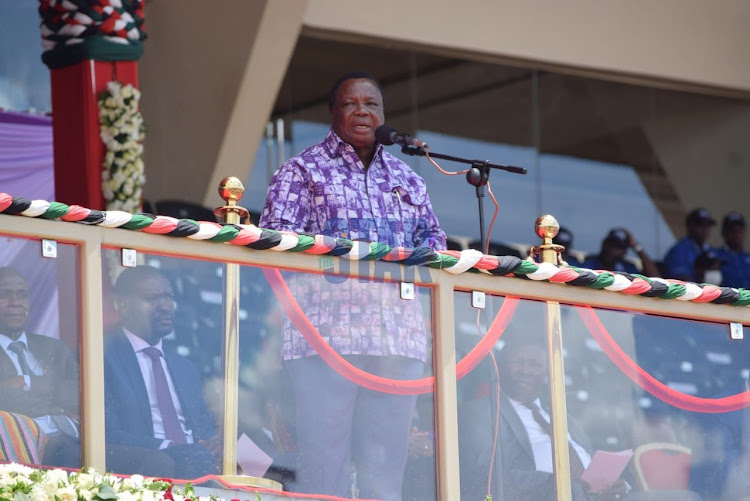 COTU secretary general Francis Atwoli has scoffed at the demands given to ANC leader Musalia Mudavadi and Ford Kenya leader Moses Wetangula by the Kenya Kwanza Alliance in its bid to capture the presidency in the August 9 poll.

The alliance led by the Deputy President William Ruto has tasked Mudavadi and Wetangula to ensure that the team gets at least 70 per cent of the Western votes.

The votes from the Western Kenya region will be from five counties; Kakamega, Bungoma, Vihiga, Busia and Trans Nzoia.

On Thursday, Atwoli said the conditions set for the two leaders are not a walk in the park, and that they will hardly mobilise even 10 per cent of the votes.

He added the region is fully behind the Azimio La Umoja One Kenya Coalition, led by its presidential candidate Raila Odinga.

"More than 80% of Western Kenya voters are in Azimio. It's only in pata potea where you can be asked to come with 70% so as to be given 30%," Atwoli said.

He added that Kenyans must be wary of the tricks within Ruto's UDA party.

The move comes as the Kenya Kwanza agreement indicates that the presidential hopeful shall create a powerful post dubbed the Office of the Prime Cabinet Secretary.

The position will be reserved for ANC, led by Mudavadi.

The prime CS post will have clearly defined roles.

Ford Kenya will produce the Speaker of the National Assembly, according to the deal.

The position of Senate Speaker would be handed to Kilifi Governor Amason Kingi's PAA party.

Kingi wants Ruto to ensure operational changes made in the recent past are reversed.
News
2 weeks ago
WATCH: The latest videos from the Star
by KEVIN CHERUIYOT Online Journalist
News
12 May 2022 - 15:04